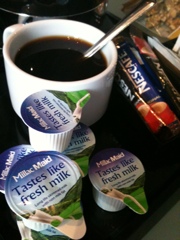 When we first arrived at our hotel in London, we were exhausted from our overnight flight and jet lagged. The room was quite nice and had all the modern day conveniences. Instead of an American style coffee maker, which frankly grosses me out with the brown stains even visible on black plastic, it came with a lightening quick water kettle. Plug it in, flip the switch and the water is boiling in seconds. Next to ours were four cups, a selection of teas and instant coffee and a plate with petite pieces of carrot cake. Three of us had a quick bit of tea while the eight-year old took a cat-nap and were off to do something soon after.

It wasn’t until this morning as we were leaving that I looked closely at the little packets that came with the tea service. I had been reading the label as “Milk maid” and “Made with milk.” What it really says is something a whole lot less appealing. In the attempt to assure the consumer that the product inside is q good one, the “tastes like fresh milk” made me pick it up questioning the contents instead.