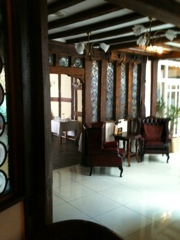 The Talbot Hotel in Stourbridge is old. It was first built in the 1600’s and expanded, remodeled and updated constantly since. The room we are in is known as “the family room” because it has a double bed and two twin beds–an ideal set up for people traveling with two kids who don’t want to stay in the same bed. This is a configuration I don’t see a lot of in American hotels but would be an instant hit.

The Talbot was originally a town house boasting “ten hearths” at the time of the hearth tax–I could google that for you, but I am doing this from my iPhone, and you probably have a keyboard. It reminds me a lot of the White Swan in Stratford-Upon-Avon we stayed in on our last trip to England. Like the Swan, the Talbot has interesting layers with connecting doors at odd angles. The thick dark beams contrast with the white plaster walls. The floors are no longer level, and furniture and windows tilt at odd angles.

There is nearly a foot difference in the floor of our room from corner to corner. I put a round tube on the small dresser and it rolled off as the right side of the dresser tilts up about eight inches higher than the left. Photos cannot capture the Escher-like feeling.

The quaintness of the place outweighs the small inconveniences of the architectural oddities. I like staying at places with character over sterile chains, and this place certainly has plenty of charm. (The free wi-fi is pretty nice, too.) 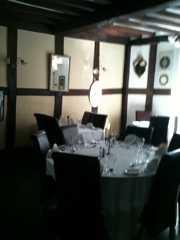 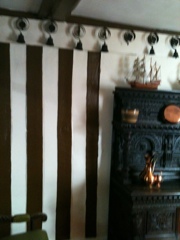 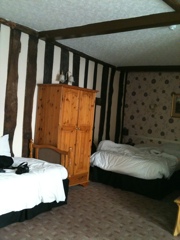 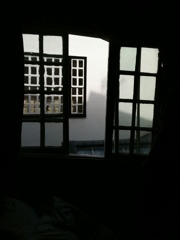 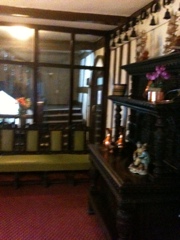 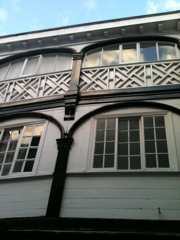