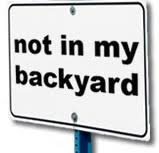 I’m the first to admit to having scorned NIMBYism in the past. When fueled by self-centeredness and a lack of any nod to “the common good” I find it more than a little unpalatable. It’s taken me a while to admit that I have a full-blown case of NIMBYism that is entirely based on the proximity of the new road to my home.

As soon as I found out King County had made the call for people to join their “Citizen’s Advisory Group” to explore the seventeen various possible routes of a new arterial near us, I applied. I missed the first round but was called in later as people dropped out of the original group. I went to all the meetings and looked at all the options along with a bunch of other people who live in the area. It turns out most of us had very personal reasons for joining in.

The decision for the route was made largely out of political pressure from the City of Redmond. The engineers from King County showed a clear preference for one route while the others were much less favorable–in terms of engineering as well as cost. The passage of I-695 and it’s hidden nasty clauses (thank you, ass hat Tim Eyman and anyone voting for I-695) in 2000 made the routes favored by the county illegal. It’s very convoluted and has to do with where city, state and county roads meet up and how funding is and is not allowed to be used.

The long and short of it is, though, that we were down to three possible routes, and the majority of the CAG decided that the best alternative would be the one that literally runs through my backyard. This is not just a figurative sort of statement as in “they are putting a half-way house somewhere within a mile of my house” sort of thing. The county has already purchased, via Eminent Domain, about an acre of our land.

from the Urban Dictionary:

NIMBY
Not In My BackYard: a person who opposes particular construction or projects in their community. Particularly prominent in New York City.

Good NIMBYism: Jane Jacobs opposing the construction of the Lower Manhattan Expressway, which would have eviscerated the present-day neighborhoods of SoHo, Greenwich Village, and TriBeCa; Jackie Kennedy saving Grand Central Terminal from demolition and replacement with an office tower.

Bad NIMBYism: Fighting the development of a nearby tall building because it might block your view; opposing a new subway line or water tunnel, which would benefit the city for years to come, because of construction noise in your neighborhood; opposing the expansion of the museum across the street because of minor inconveniences, even though it’s the primary reason that your property is so valuable. I.E.: Being selfish

Iffy: People who fight LULUs, or Locally Unwanted Land Uses: developments or institutions that are needed, but that nobody wants near them, like homeless shelters or power plants.

As I write this, I hear the constant back up beeping of equipment down hill from where I sit. I’ve been pacing back and forth between windows, looking out the window to see what I can hear, to use my eyes as confirmation of the destruction I know is happening very close. All I can see at the moment is the bright orange wetland fencing used to mark off the construction site and some orange flags. They just started on Monday, so I know it’s just the beginning.

The thing is, I voted for this route along with others. Not that I ever WANTED a road to tear apart our beautiful little woods. We were down to two choices. The other involved closing off a major arterial for two years and literally blowing up Union Hill. Sure, Union Hill is a mile away from us, and the impact on us would have been minimal. However, a significant wildlife corridor used by deer, coyotes, bobcats, bears and mountain lions would have been completely shut down. There were other environmental issues and lots of other problems with that alternative. Though, frankly, I was disappointed that several people voted against it simply because it would cost more money.

I don’t plan on wallowing in this for too long, but I found myself really, really sad as I thought about the changes that are coming. I have too much in my life to be grateful for to stay stuck here for too long, but I just had to…vent. Thanks for listening.