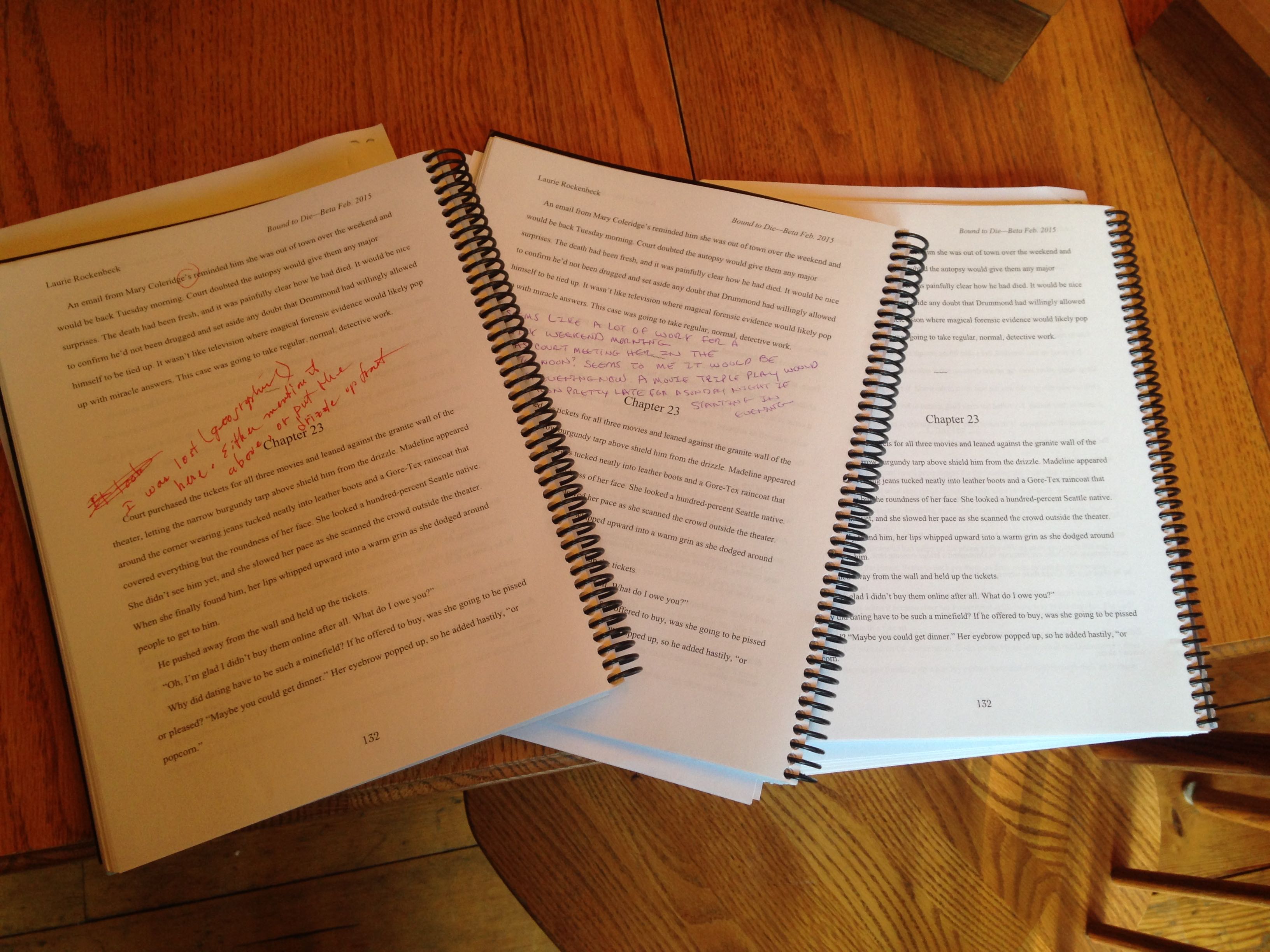 People have been asking me questions that are some variant of “So, how’s that book coming along?” or “When is your book coming out?” and “Didn’t you win a contest or something?” and “Hasn’t it been a while now?”

It feels like FOREVER since I started Bound to Die for NaNoWriMo in 2011. I took a look at the original 50,000 words and realized I have kept about 5,000 of them. Ten percent. I point this out to illustrate that, as a newbie novelist, I am learning as I go. Writing a novel is about ten thousand times more difficult than reading one. And, when you do it the way I did, it’s maybe a gazillion times harder.

The problem with NaNoWriMo is, it’s all about process and not product. The problem with this is…well, it’s NOT about the product. So, my 2011 NaNoWriMo was a mess. It’s taken me three years to turn it around into something that is readable. In Mid-February, I sent the manuscript off to six readers to get their response.

The image above shows the first three manuscripts I got back. I used this image to illustrate the next step in my process. I will be comparing notes from all six readers side-by-side and page-by-page. For example, readers of two of the returned manuscripts have brought up an issue at the start of Chapter 23. They are having DIFFERENT questions, but this tells me that I have to re-write the transition into the scene or fix it some other way to keep people connected to the story.

As the author, I get to make all the decisions about things, but when half the people are being bumped out of the story, it’s clear something is not working. This is tricky, because writing by committee doesn’t work. I’m trying to work out a metric on this. If only one person is bumped by something, I look to see if it’s a big bump or a little one. If it’s something easy to clarify, I will. If it’s something that I think is just that reader’s ‘personal issue’, I’ll probably ignore it. If more than two have a bump, then I KNOW there is a problem.

One person told me he doesn’t like the name I chose for my protagonist. It just so happens he had a bad reaction to the name because he was projecting from a life experience. I get that, but I decided to keep the name I had very carefully chosen even though I know at least one person won’t like it. Heck, I know more than one person won’t like the book. (And, there’s the topic of my next blog post–thick skin…)

I’m heading off on a three day intensive editing retreat this week to go through all the fabulous and thoughtful responses I got from my “beta readers.” I have an appointment with a developmental editor in April, and then I’ll be ready to do one more edit before sending it out to agents. I had a bunch of them interested in the story at last summer’s PNWA conference, and I can’t wait to get it into their hands.