Calendars; just art on the wall. 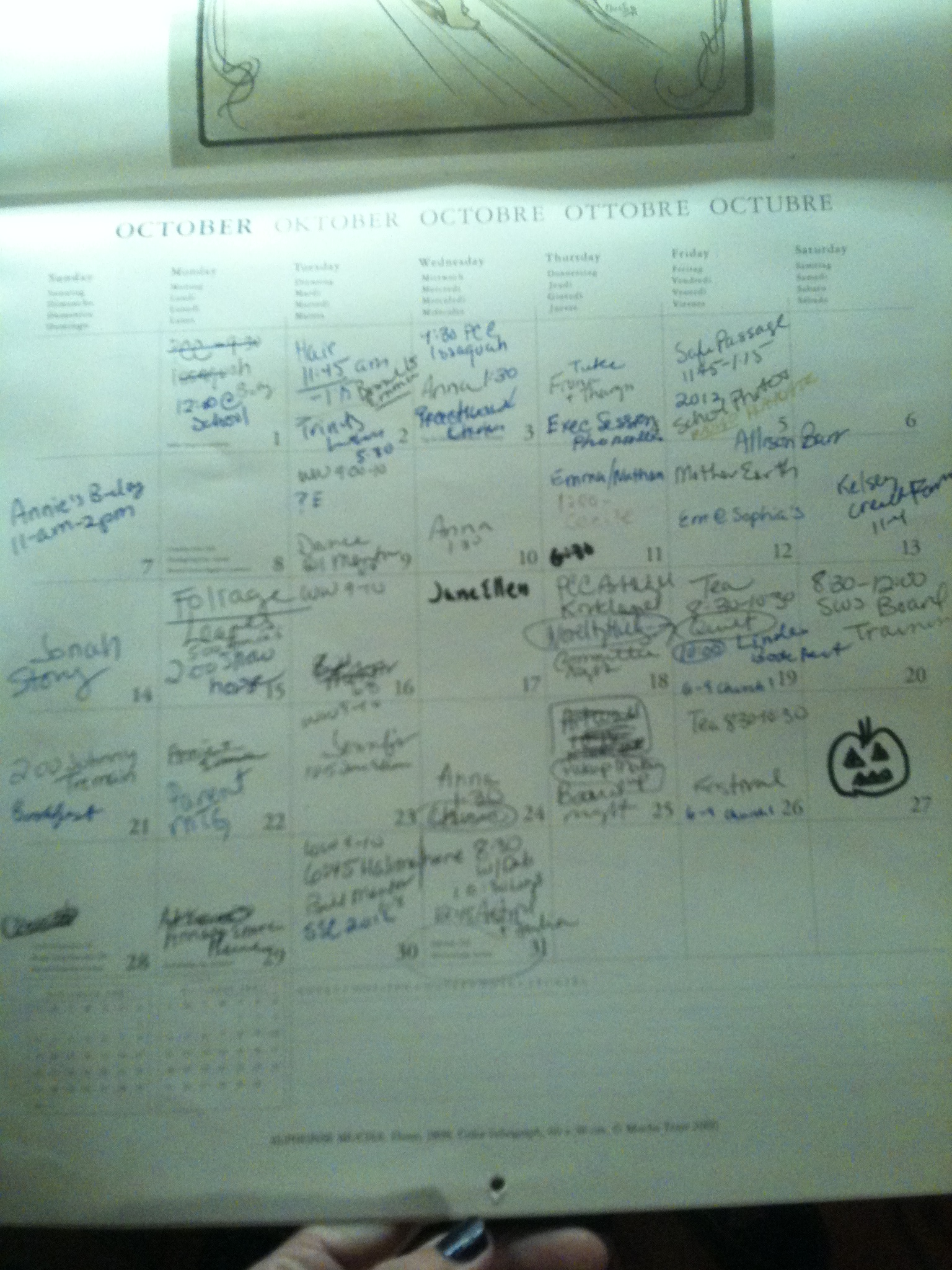 I like calendars. Whenever I go into a store at this time of year, I can’t help but stop and look at them. Puppies, kittens, horses, Mucha,Degas, Renoir, Vargas, and the list could go on for way longer than you are willing to read. The thing is, every year there are umpteen calendars put together by various companies and sold just before the end of year. I can only guess how many are sold as holiday gifts. And, I like them. The only problem with them is that I no longer use them. I’m more than a little glued to my electronic calendar–I keep it in my pocket except for when it’s charging, and it’s always at hand. My daily, sometimes hour-by-hour guide to my life, is now completely electronic, and I rely on it more than I care to admit. When I was using a calendar on a daily basis, I don’t think I needed it as much. The very act of writing something in pen on a piece of paper helped to seal it into my mind at a deeper level than typing it into the iphone does. When I got a cell phone, my ability to remember people’s telephone numbers disappeared mostly because I no longer needed to remember them. The same thing has happened with my ability to remember dates. If I add the date to the iphone, it syncs nicely with my outlook calendar, but I still have no clue what I’m supposed to be doing day to day without looking at the electronic reminder. I cleaned out the basement a little bit recently and threw away a bunch of old calendars that I decided I no longer needed. Or at least, I think I threw them out, but I can’t quite remember if I just thought about tossing them or if I actually did it. I wanted to find the calendar I used while going through invitro-fertilization because I know it was crazy with appointments and marked up. All I could find was the calendar from 2001. Not sure why I saved that of all the various years I had, though I suspect it’s because it’s the “Mucha” calendar I drooled over for a while before getting it. (Might have been a gift, but, alas, I forget.) The handwriting on my calendars was never really meant to be shared, and yes, I can read and even understand some of the cryptic comments or notes. The picture of the pumpkin is certainly code for “pumpkin party,” but even the amateur sleuth can figure that bit out. 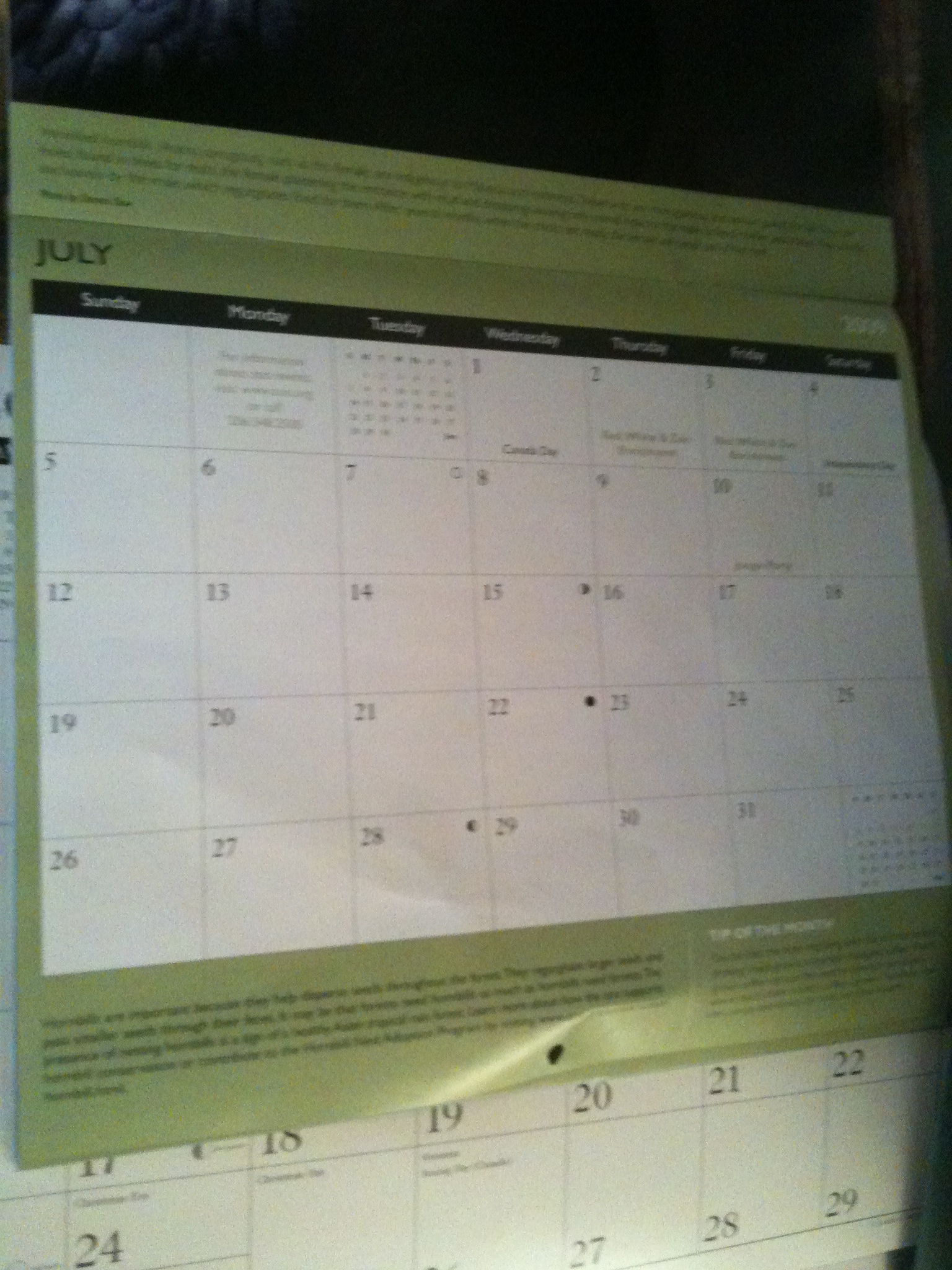 Just last week I was going through the pile of mail on my desk by the door where I have a calendar hanging on the wall. I looked up and noticed that I have three calendars hanging on the same peg, 2007, 2008 and 2009. The oldest has a couple of entries and the two newer ones are entirely blank. The 2009 calendar was still set on July. Here it was, December 2010, and I hadn’t even thought to really
look at the dates hanging right above my head. I have my eye on a calendar that I thought was pretty at Whole Foods. Maybe I’ll pick it up, on sale, if it’s still around after the new year rolls in. It’s just sort of makes me sad to think I’ll buy it knowing full well that I’ll probably never make a mark on it.