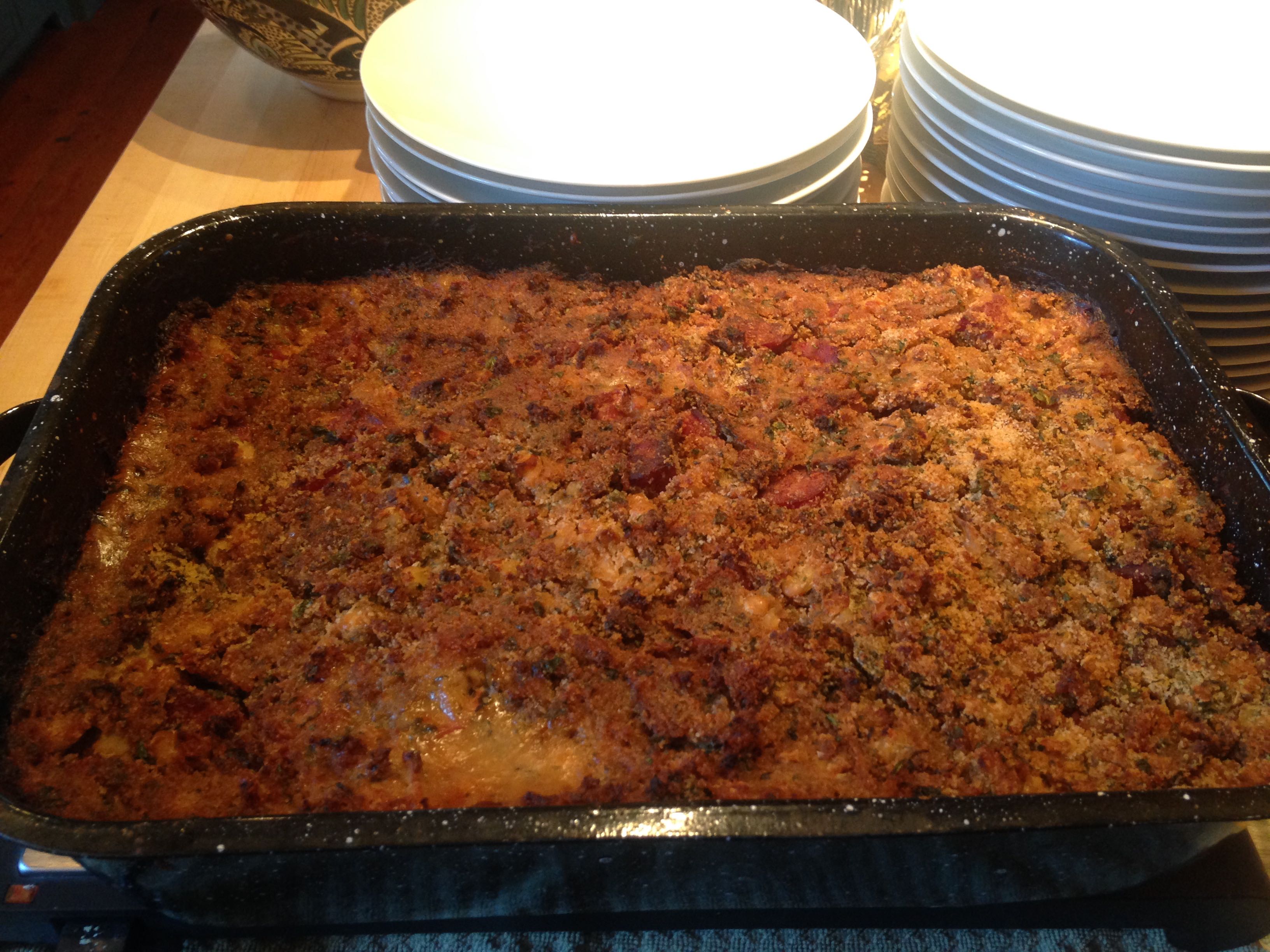 For many years, my in-laws would celebrate their New Year’s Day wedding anniversary by hosting an open house and serving Cassoulet. January 1, 2015 was their 50th anniversary, and a cassoulet open house seemed the perfect way to honor their golden year.

What is cassoulet? Essentially, it’s baked beans. In France, people will take whatever meats they have left over from their meals, put it in a pot with beans and bake it. However, not being French, and not having leftover meat enough for fifty people, I definitely had to start from scratch. I used the old Julia Child cookbook my mom-in-law had used, watched the Julia Child video on youtube and went from there. The idea of using duck confit came from the cookbook, and I decided that sounded extra rich and yummy.

I had made a ‘quick’ version of duck confit recently in order to get the duck fat for roasting veggies. The store was out of duck fat, so my only choice, really, was to render it myself. The duck meat itself wasn’t my prime target on that one. But, during my research, I had learned duck confit is traditionally made by covering the duck with salt, weighting it down and letting it cure for several days before covering it with lots more duck fat and then cooking it in the fat at a very precise low temperature for hours. Kind of finicky for me, but I was willing to do it.

Then, when I was looking for the directions again, I came across a recipe by Paula Wolfert. (I tried linking it here, but the site doesn’t allow linking–you can google it under Paula Wolfert Duck Confit.) She basically has you put the duck in a pouch and watch the water at 180F for five hours. Basically sous vide without any machine to help. This still requires pretty consistent attention. It just so happens, my husband bought me the”Anova Sous Vide Immersion Circulator – 120V Circulator Cooker

” for Christmas. I knew immediately what my first use of the new Sous Vide machine was going to be.

So, here’s how I did the confit for the party. It’s a lot of duck, but packed in its own fat, it should last for months. Either do a huge batch or reduce the quantity of spices and you’ll be fine. I don’t think there’s anything exact about that part. I saw several recipes that added lots of garlic to the mix, so next time, I might do a garlic confit. (I just didn’t want to flavor all my fat with garlic this time out.)

I started by cleaning duck quarters and rubbing them with salt, pepper, and crumbled bay leaves. I had fresh thyme still alive in the garden, so I just layered fresh sprigs on each piece. I piled the duck into a sealable container and pressed it down with a piece of plastic and closed it up for three days in the fridge. 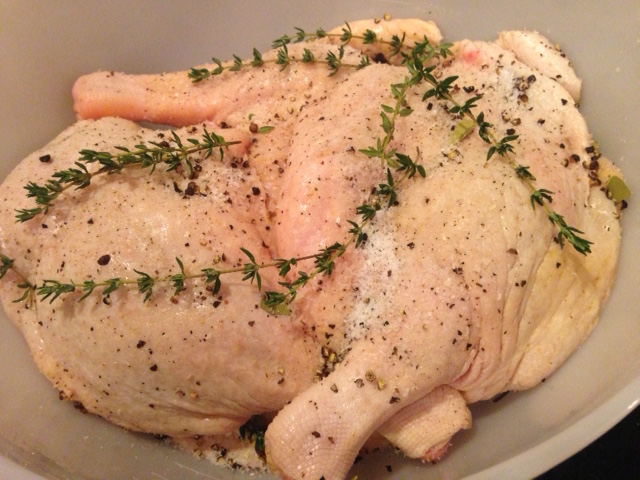 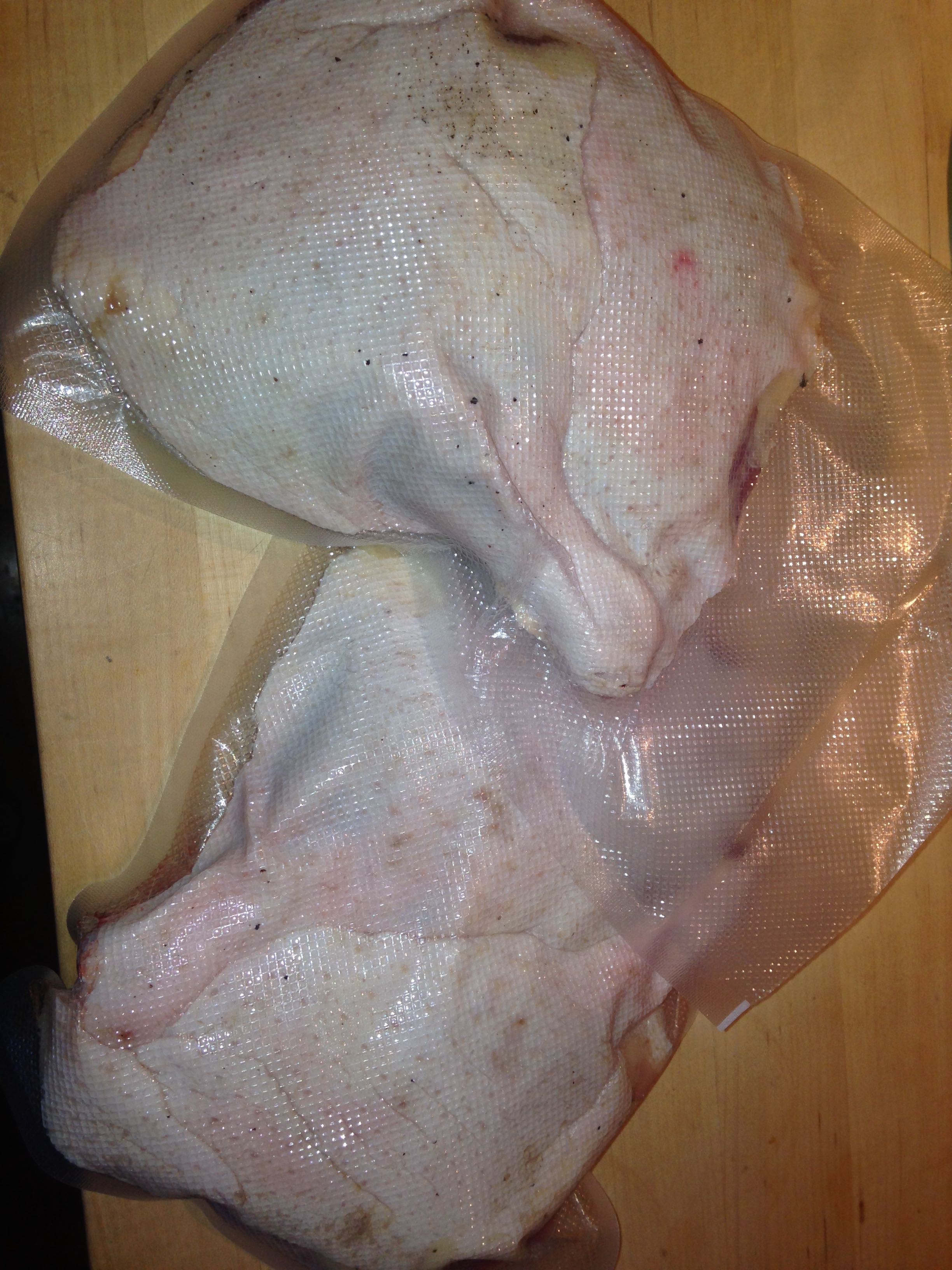 After the duck had been salted for several days, I washed off as much of the herbs as I could and dried very thoroughly with paper towels.

“>) to suck out all the air and seal the plastic closed.  (While I did this, I had the Anova set up in a huge pot with water warming to 180F.) 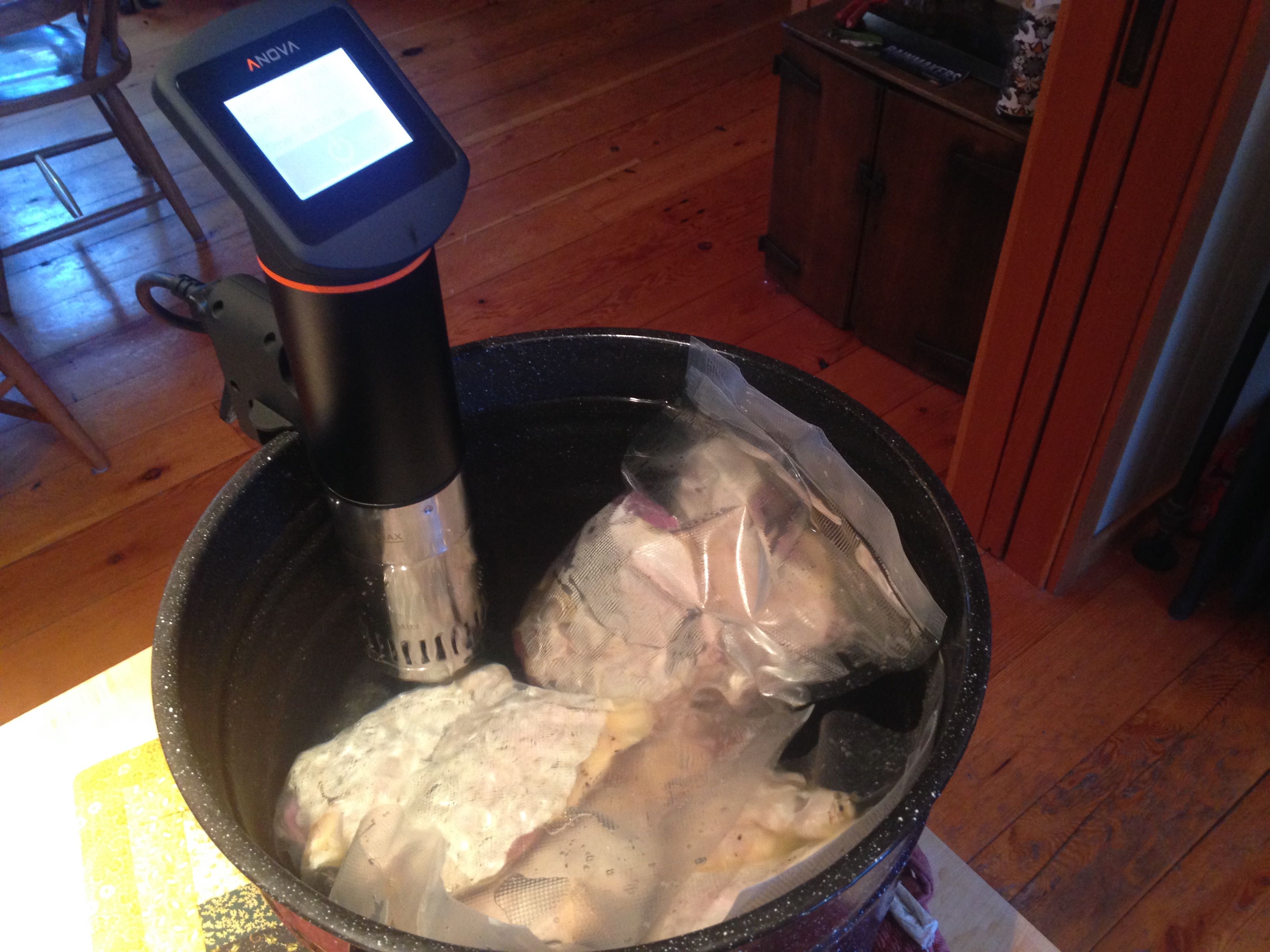 Then, I put all the bags in the huge pot with the Anova. I had filled the pot with very hot tap water, set the machine to 180F and left it to come to temperature while sealing the duck. This is the easy part.  I left the bags in the pot for a long time.  Wolfert said 5 hours, but I actually left mine on for a lot longer. More like ten.  My goal was to get to the point where everything looked rendered and the meat was falling off the bone when I poked at it through the plastic. 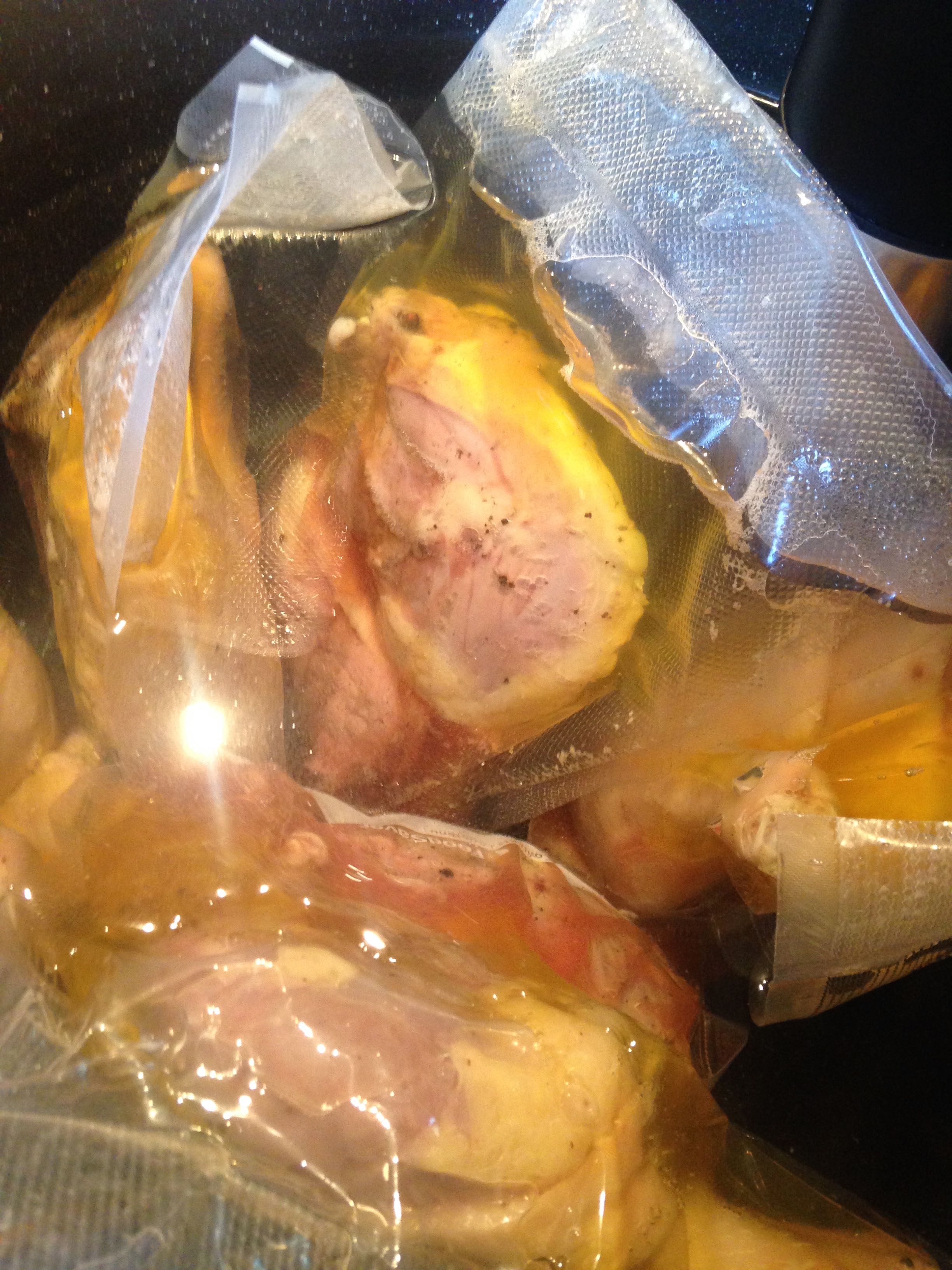 As you can see, the fat renders from the duck as it cooks.  This is probably around four or five hours of cooking when I took this photo.  Honestly, I had a meeting that evening, so I left my husband to pull the duck out while I was gone.  You just have to decide when it is done, but with confit, I think the more tender it gets the better.  Check it at five hours, then every hour after until you are satisfied it is melty enough for you. 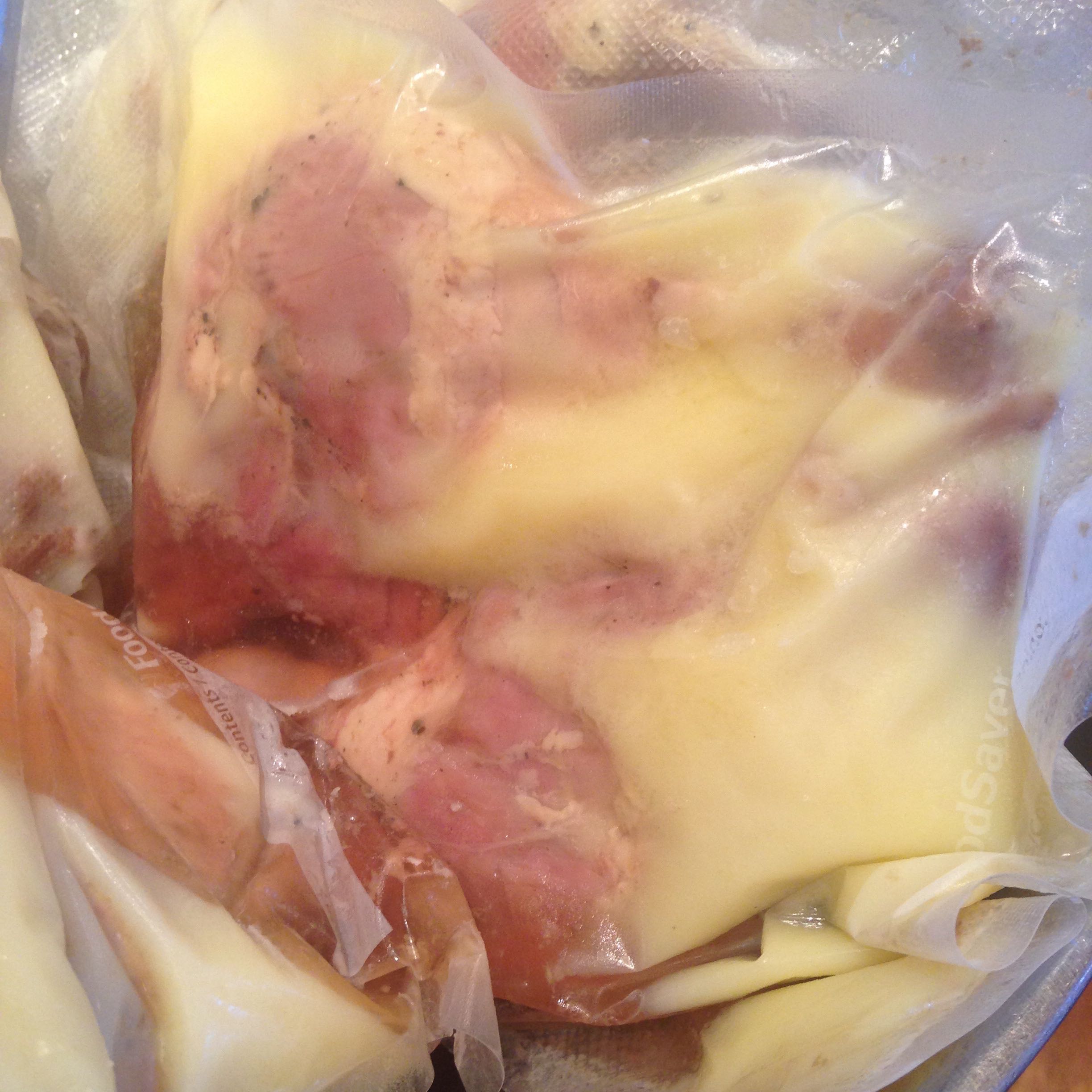 This is the duck after the duck has cooled overnight. The yellow is the rendered fat, and the pink-jelly like stuff you can see if you look closely, is the rendered juices. At this point, I opened up the bags and scraped the fat into one bowl, the juices into another,and pulled off the meat from the bones so I could use chunks of the meat in the cassoulet. For regular use, I would just leave the duck in the bag until I needed it. Traditionally, you would take the whole piece, reheat it gently and pan fry the skin to a crisp golden yumminess. Since I was serving fifty people off the ten pieces, I had to remove the bone and put pieces throughout the dish instead.

(And sorry about the formatting on this post. I made the mistake of switching to ‘visual’ mode in WP, and couldn’t figure out how to make it look even.)