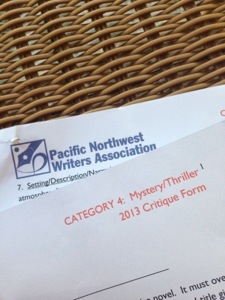 Earlier this year I entered the Pacific Northwest Writers Association contest with my current work, a thriller set in Seattle. While I didn’t win the contest, I am happy to have some new ideas to fuel the revisions ahead.

If you had asked me eight years ago what I was going to write, I doubt this genre would have come to mind. Neither would have erotica. I finished the Literary Fiction I and II certificate programs at UW, finished one novel (on the shelf), and wrote several NaNoWriMo 50K pieces in between, and found myself floundering with the bigger works. Yes, I have 10 (!!!) shorter erotic pieces published under my pen name, but novel length works are still a struggle for me. I just finished the year long Popular Fiction I certificate program at UW, taught by the incredible Pam Binder, and now have an honest-to-God completed rough draft of a novel. Whew!

It was the first twenty-five pages of this novel that I submitted to the PNWA contest in February. Two copies of each submission are sent out to volunteer readers who critique the work in ten areas. You get a score of 1-5 with 50 being the possible high score. The areas of critique are Synopsis, Plot, Viewpoint, Characterization, Pacing, Dialogue, Setting/Description/Narrative,and Mechanics. That’s only eight. The other two questions are “Can you tell who the intended audience is?” and “Would you read more of this current version?” There is space for comments under the score for each area. I found the comments illuminating, well-considered, and thought provoking. Both of the people reading my work were thorough and brought up issues that hadn’t even crossed my mind as well as things that I have on my “to do list.” For example:

The author might want to investigate police procedure. (removed some detailed examples) These sort of errors could cause an Editor to stop reading, and that would be sad.

Indeed, it would be sad. I am not writing a procedural piece, but there are some basics I need to learn. One of the things I was called on came from interviewing someone working in the field of forensics. She mentioned that there is usually a great deal of tension between the forensics specialists and the detectives on a crime scene. Detectives tend to look at the whole picture of the scene to figure out “who did it” whereas the forensics folks are looking at the micro-scene in detail to figure out “how it was done.” According to my singular source, there is every reason to believe that detectives would want to see the whole scene before it got “mucked up” by the CSI folks. So, it just goes to show that if you are writing outside your area of expertise, more research is better, and multiple sources are imperative. Clearly, I am going to need to do more. It’s been on my “to do” list for months.
Another comment I got back was:

There are no small cities on the Eastside anymore, unless one drives to Carnation or Duvall, and there are tons of good restaurants (especially in Kirkland, Redmond and Bellevue Square area.)

Is it that the person critiquing the work didn’t get that was my character’s POV(point of view)? Or is it that the character’s POV was offensive to the reader? I need to consider how readers will “read” things, but I also have no problem with writing a character who looks down his nose at the Eastside. It doesn’t matter what restaurants are on the Eastside. (That topic alone could generate a heated debate.) The fact is, the character is someone who grew up in San Francisco and thinks Seattle is a small-po-dunk city by comparison, let alone the Eastside. He lives without a car on Capitol Hill, and he wouldn’t think much of anything over the water. This comment tells me I need to delve more into that character, and make sure his POV is coming through and that it is not an authorial declaration. What I’ll do is review that scene and see how I presented the thought. If it was done as internal dialogue, then I will take it out and put it into straight dialogue when I do my revising. It also tells me I need to establish that character more firmly before he gives voice to the thought.

Both people commenting on my work gave me some juicy ideas and asked questions that I didn’t realize I need to answer. As an author, it is easy to forget what is in my head and what is in the text. It’s helpful to have someone who hasn’t heard you talking ad nauseum about a story or isn’t related to you to read your work, too. I got a lot of positive comments as well, but, like most authors, I dwell on the negatives and questions because those are the things that need fixing. I also love this quote from one:

It made me laugh. I’ll take it as encouragement.

To my anonymous critiquers, I would like to say “Thank you!” You’ve given me much to work with, and I appreciate your time and effort.