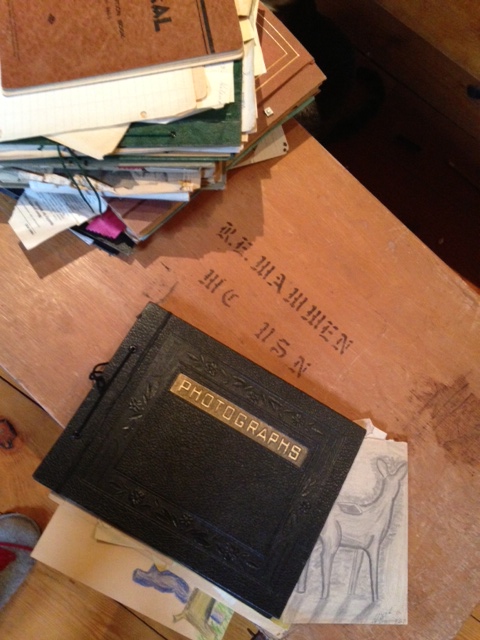 My dad’s Navy trunk with some of the stuff from inside.

As you might have guessed, I took up the NaNoWriMo challenge again this year. I’m about where I am supposed to be, and after this afternoon’s writing session, I should be well ahead of the game. That is, I will be if I don’t get completely distracted by the things I am finding in my dad’s chest. It started out with today being Veterans Day and all. I was thinking, “Hey, why not put a picture of my dad in his Navy uniform in my FB profile for the day?” A way to honor the fact that he was a career Navy man. I run to the chest of “stuff” that I had brought back with me after my mom died, and start looking for a good picture to use. I find this pile of scrapbooks that I’ve been meaning to look at and a bunch of other folders with lots and lots of writing. Letters. Essays. Poems. Stuff.
I spend fifteen or twenty minutes looking for a photo that I can use as a profile picture today before I get completely sidetracked reading things. For example, my Aunt had a friend/lover? who was a Fulbright scholar in Finland. He wrote a 60 plus page paper on his experiences there. I only glance at that work before becoming engrossed in an interesting paper called “Calliope” by B.V. Goble. At first, I think it might have been a student paper my aunt had saved. But the date was wrong. My aunt was retired before the date the paper was written (August 9, 1978). I continue reading this thing that first seems like some sort of poem and then realize it’s more an account of B.V.’s of his and my aunt’s high school reunion.

And, if I haven’t mentioned this, my current NaNoWriMo project is a book I’ve been “head-writing” for the last fifteen years called “That Man From Fishtail.” It’s based very, very, very loosely on my father’s family. I am creating a new and wholly fictional narrative, but I am using the family time-line plus some stories my Grandmother used to tell me during our summer visits for the current draft of the novel. I suspect that the actual book, when it’s done in another three to twenty years, will be very unlike our real family history that serves as its framerwork.

Much to my surprise, I come across my brother Ken early in this piece about my aunt’s reunion. The author says:

I meet Ken at 15, peach fuzz face, eager but wary eyes, mere slits, thin shoulders, hairing legs, walking like a man to try it, uncertain mouth, all of his tender, untried. Or so I guess.

My brother was in Billings taking care of my Aunt during that summer. She had just had heart surgery, and he had gone up to be with her. I think he might have been 16, because I know he was driving. Could have been he had a permit and was able to drive because Lou was licensed, but I am not sure about that. I keep reading for more nuggets, enchanted by this stranger’s prose.

Then there was this, about my Grandmother:

Clara at 86 has moments of total withdrawal, then others with active attention for this very day. She is bent, shows selective memory, herself only now nearly her entire being. She drinks a second whiskey pretending it’s for me. Still vain, she has 37 wigs, all blue grey or grey blue, and 42 pant suits. She is the patient of doctors who must marvel. Once she waxed floors all day and far into the night. The next day she practiced her piano all day and far into the night. Her paintings were usual but occasionally curious–one a mother in a long dress holding a baby high in the air, all in sepia, neither with faces, and I have it.

The “and I have it” stuns me. Who is this B.V. Goble that my grandmother would give him her art? Rational me understands that she has given away many paintings, but I have this sense of loss. Something of hers which I have never seen–a mere symbol about all that I never knew about her. I have a couple of her paintings, and most of them are, as he says, “usual but occasionally curious.” This man knows her well even with his exaggerations. She only had a dozen wigs, though the 42 pant suits seems rather accurate. I remember the suits being all white and polyester, but I am pretty sure that is my child’s memory interfering and blurring.

And then Goble gives me a jewel, a precious quote that connects me with a dear aunt who is the foundation for my protagonist.

Louise at 66 remains complete, only neck wrinkles showing her age. An unknown woman at 28 and now too, a whole life spent apart, often aware of the slightness of it, her hold on it protectively slight too. She’s never but once had occasion to be deeply committed. I told her then in a letter from Camp Roberts in 1943, “Louise, Louise, let down your hair,” but she did not. In a night club one Saturday night they played “Begin the Beguine” and she cried, laughing at herself. She wore a black dress with a broad white collar and never looked like a nun. She could sit quietly and listen to music. She believed in love. At 60, a lady librarian propositioned her. Open heart surgery two months ago succeeded. “I might be dead!” she says and is merry.

I am stunned when I read this succinct paragraph about my aunt, the one who “is off with That Man From Fishtail” at some point in her life and in my fictionalized version of it. As I reconstruct the truths of the past to weave them into the lies I am making up as a writer, I find myself distracted by all that has gone before me.