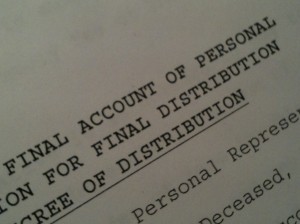 I was plowing through the fourteen inch stack of mail on my desk when I came across an envelope from the attorney my brother used to get through Mom’s estate stuff.   A few months ago, I marked the third anniversary of her death in this blog in Marking Time. Anyone who’s had a close relative die knows that death can be the start of an interminable string of paperwork, and court hearings.

My brother who lived in the same town as my mom ended up her personal representative and was charged with doing all the work.  I would chime in via email when asked about various issues, but I really like to think Ken had the freedom to pretty much just “take care of things.”  It’s not that I didn’t have opinions or concerns or didn’t want to be involved.  My distance from the process really had more to do with the fact he lives in Carson City, and I don’t.

(Another blog post comes to mind here, but I’ll tuck the one titled “Things to do before I Die so I don’t drive my children or other heirs insane or embarrass myself posthumously”  aside for another day.)

It shouldn’t have been much of a surprise to open the envelope and find the letter from the attorney explaining that the enclosed document was the State of Nevada’s official form explaining the final distribution of my mom’s estate. Ken managed to sell the house a few months ago.  And, while I figured there would be some sort of final distribution to the four of us, I hadn’t thought about it for a while.   The words in the photo jumped out at me in black and white.

I had a renewed and profound sense of loss and sadness.  There is something so impersonal about seeing the words Final Distribution in legalistic capital letters like that.  While I suppose the legal work is officially complete, I can’t see it as an order to “be done now.”

Grief morphs over time.  I swing between sadness and anger, loss and nostalgia all the time.   I’m not done distributing my grief  in spite of what the State of Nevada might think about it.