Flexibility, ya gotta have some 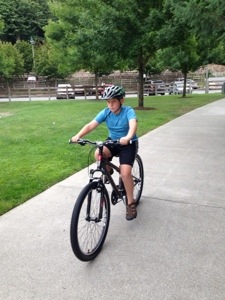 Those who know us are probably surprised by this photo. Yes. It is Eli, OUR ElI, on a bike. My feelings on the whole bike thing haven’t changed all that much. I am not thrilled to have bikes back in our life,but there it is. Sometimes, as a parent, you have to bend a little and meet your kids halfway when their heart is set on something.

Let me back up for those of you who are wondering what the heck I am talking about. You see, a few years ago, my husband was in a pretty bad accident. With multiple breaks and a crushed helmet, he was lucky compared to some. Without the helmet, he likely would have been a vegetable or dead. Sure, we know people who have suffered much worse, but this was more the last straw after a series of accidents over the long term. Bill hung his bike on the rack and that was it.

We were lucky our daughter showed little interest in riding, and she never pleaded the cause. It is easy to say no when no one is asking. Our son is entirely different. He’s been asking for a bike for years. I mean that with the legitimate literal use of the word “years”. We’ve said no over and over again, making it clear to anyone who asks that it is our decision, as his parents, that he doesn’t get to ride a bike.

People’s reactions have been mixed. I’ve had other parents in my face with how wrong it is to withhold the joy of riding a bike from our son. I’ve had other people shrug and look at us like we are lunatics but not say anything. I’ve run into blank stares, as if the concept wasn’t something easy to grasp. And, then there is our son who has been begging, lobbying, and annoying us about it every chance he gets. A couple of months ago, I was beginning to waiver. It was more about the forbidden fruit and how keeping him off a bike and the arguments around the bike were getting to be more a problem then letting him actually get a bike.

Between my own “meh” attitude and the difficult fact that we do not live in bike-safe territory, it is not just getting a bike. It is getting the bike and him to a safe place where he can ride away from heavy traffic. This means bike, plus our time–our time doing something that we don’t really want to do. In spite of the various mental hurdles, I was making preparations to do my own lobbying for a bike for his 11th birthday in September.

Then, a few weeks ago, he went off with his grandparents to Pennsylvania. While there, they bought him a bike to use on the lonely road near the family home. The genie, as it were, was out of the bottle, and my son was smitten. Even after he fell and had bloody flaps of skin on elbow and knee, he was back on the bike right away. He rode as much as he could while there and returned home with renewed vigor in his plans to beat us down.

He started in right away with an overt wailing martyrdom “I love riding, and I’ll never get to do it again….” But, underneath that loud and obnoxious statement, I saw a sincere grief in his watering eyes and quivering lower lip. He had experienced something new, wonderful and freeing. Anyone who’s ridden a bike knows what the sensation is like. I ached for him more once he knew what it was he was missing. The hypothetical loss of something fun and wonderful had turned real. Before, he just thought he would like it. Now, he knew it.

After much discussion, we decided to bend. A lot. I took my own bike in for a tune-up. We bought him a bike. Bill is looking at getting himself a new bike–his old one long ago gifted to a friend. Add in a new hitch and rack for my car to make it easier to get someplace where we can safely ride, and we have a new family activity to “enjoy.” Given that the big girl is on her way out of the country, she can’t really complain that we aren’t including her in something she has no desire to do anyway. That old saying, “If you can’t beat then, join them” is living pretty large around here.