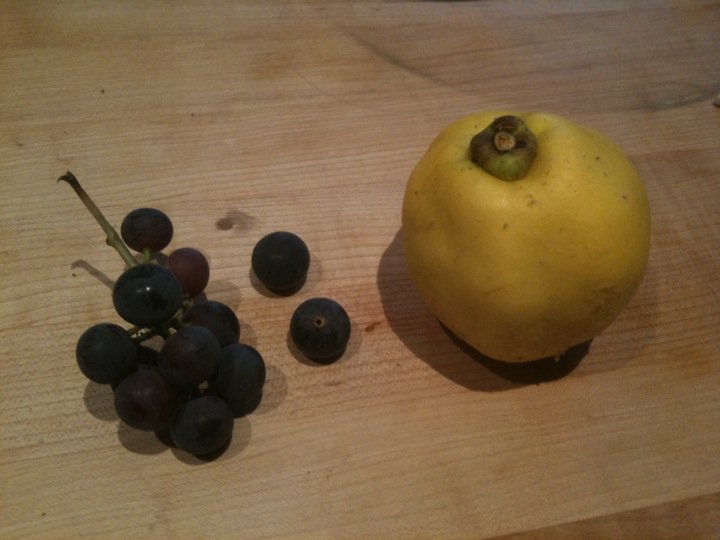 A handful of grapes and a singular quince.

Last year’s quince harvest was astounding. I don’t know how a laundry basket compares to a real bushel or peck, but we had a couple of laundry baskets last year. That’s a whole lot of quince. This year’s harvest has been quite the opposite. Given the huge quantity last year, I was understandably overwhelmed at the prospect of cleaning, cutting, cooking and juicing them all. I found a few recipes to use where the whole fruit was incorporated, but I resorted to jelly making for the bulk.

I made, I believe 32 pints of jelly. Might have been more. One batch got left to sit over night before I added the sugar and it was turned into a “Quince Wine Jelly” from the resulting mini-fermentation it received due to my negligence. I froze some syrup that makes a deliciously unique Persian drink when mixed with lime juice and seltzer. A couple of the batches of jelly I made turned out to be more syrup than jelly. Making it in small four- cup amounts is really the way to go, but I was beyond ready to be done with the whole mess when I dumped more than three times that into the jelly pot and declared it good. It never jelled. I stuck the resulting liquid in jars hoping time would make it stiffen up. A year later, I have several pints still sitting on the shelf waiting to be re-cooked in smaller batches. To be redone. 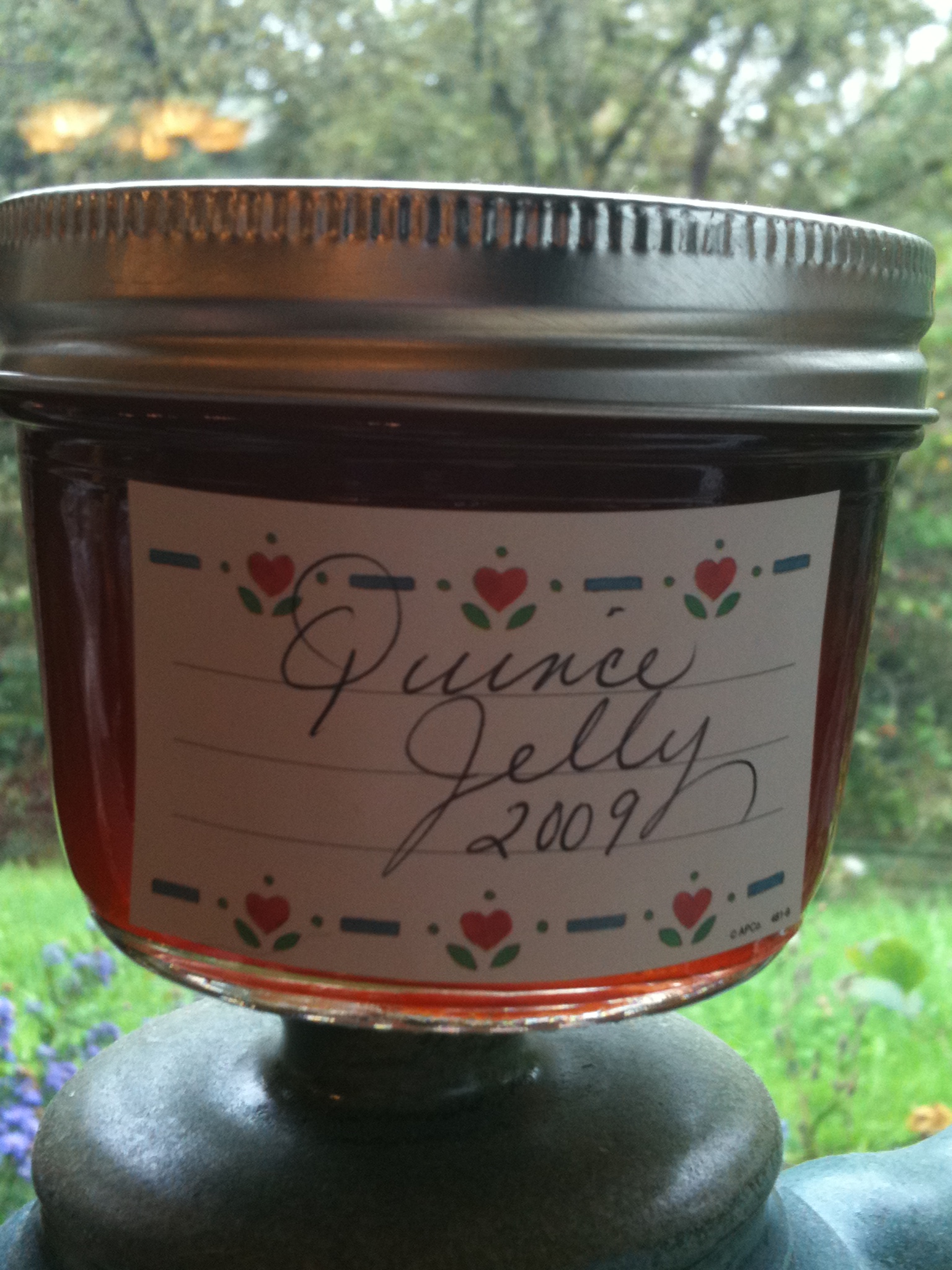 My mother-in-law's handwriting makes the jelly much more attractive. One of my non-jelled jars of tasty goodness.

Re-cooking jelly requires opening and emptying the jars, washing the jars and purchasing new seals. Needless to say, I haven’t gotten to that little project yet. Enter a box of fruit and veggies from Full Circle farm–a local CSA to which my in-laws were lucky to win a subscription. With our own apple and pear trees bearing heavily this year, I wasn’t exactly excited to get a bunch of pears, apples, nectarines and peaches all at the same time. When I’m faced with a bunch of fruit, I tend to defend myself by making pies. They require a lot of fruit all at once and you don’t generally have to worry about the jell factor.

One of our favorite pies is from a Sunset cookbook. You make a pie crust and bake it. Then, you fill the crust with fresh nectarine slices, raw, and berries–blackberries, bumbleberries whatever you might have. Then you take more berries, sugar and water and make a heated syrup thickened with cornstarch that you pour over the raw nectarines as a blanching glaze of sorts. You pop this in the fridge to let the berry sugar blend set for a few hours. Then, you slice and eat. It’s very simple, and the raw nectarines retain a freshness that cooked fruit does not.

I only had a bag of Remlinger Farm’s frozen mixed berries, and I decided that tossing them with the nectarines would result in a blechy mashup. Frozen berries work great in smoothies and are not at all pretty to look at when defrosted. I’m not exactly sure how I happened on this idea, but the fact that the non-jelly in my cupboard popped into mind. Why make a new syrup when I already had lots of it? I had Bill find a pint of it while I cut up the nectarines. Then, we heated up the syrup and I tossed in a couple of cups of frozen berries which almost all immediately melted into the syrup to create a quince based berry syrup. I had to leave right then, so Bill was ordered to add “some cornstarch” and pour the resulting hot liquid over the nectarines.

Evidently, unjelled jelly does not re-jell when you reheat it and add cups of berries to it. The cornstarch wasn’t quite enough, so after three hours in the fridge it was a nectarine and berry soup in crust. We spooned the resulting glop for dessert and dolloped some vanilla ice cream on top. Turns out, the filling was tastier than it ever had been with the regular Sunset recipe–jelled or not. The underlying base of quince syrup added a honey-like sweetness that matched up with the tartness of the berries with an unbeatable flavor. I would have to say this might be the best tasting pie I’ve made in a long, long while. It was that good. 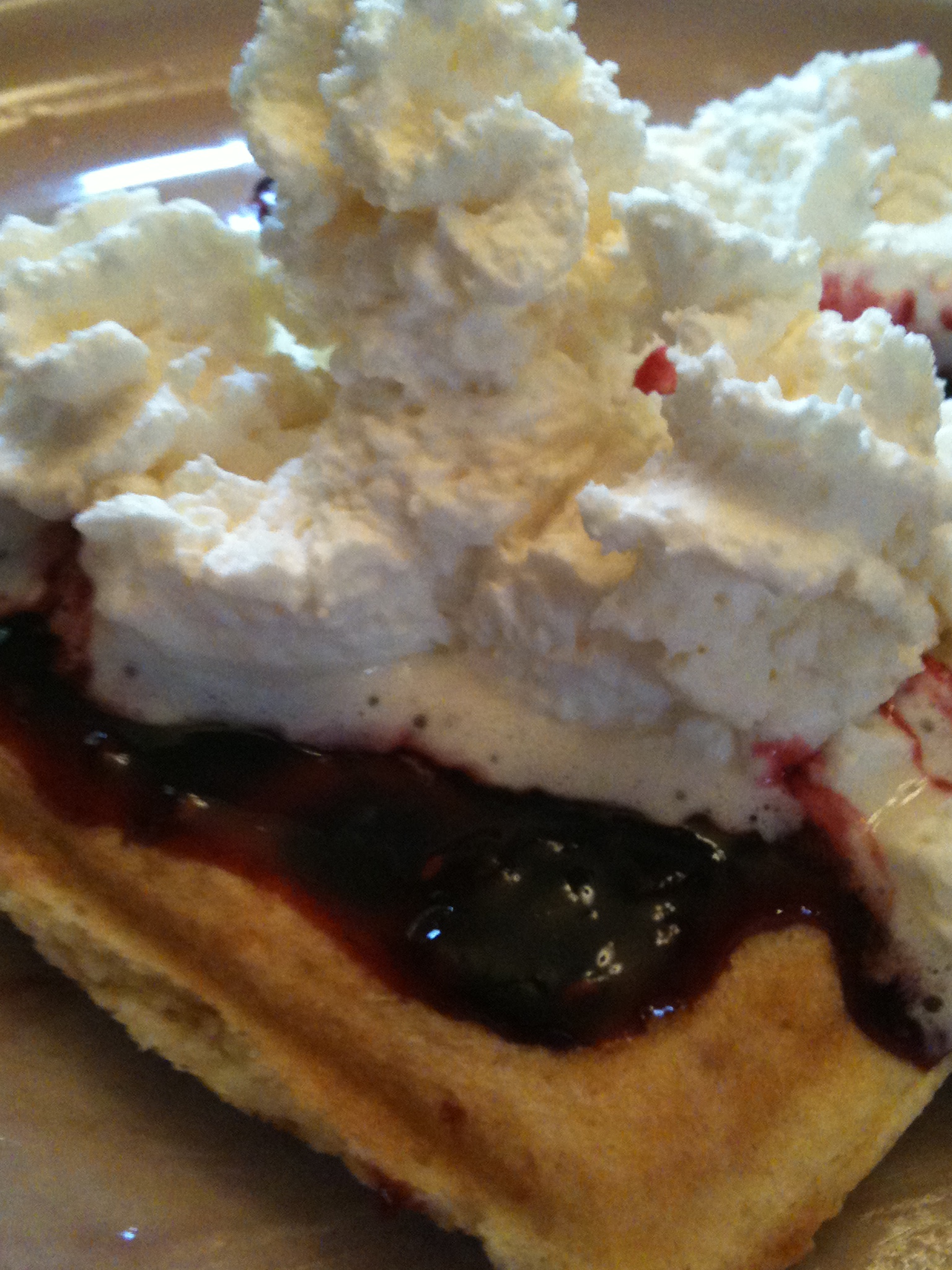 Given that I was totally guessing on quantity and flying by the seat of my pants, we had some of the resulting berry syrup leftover. It would have meant an overflowing pie plate, so Bill just left the resulting cup or so in the pot. This morning, he made waffles and heated up the syrup for a breakfast treat that was simply amazing. I’ll be doing some more experiments with the quince syrup and see where it will go for me in other ways. I just love it when a little accident in the kitchen can turn out so darn tasty in the end.