When my daughter set up a search for her compass to do her geometry homework the other night, it was nowhere to be found. It took me a long thirty seconds to decide whether or not to go ahead and cop to the fact that I had a way better compass only a few feet away.

I opened the cupboard above my computer and found the black leather case that I had placed there when we moved into the house ten years ago. It is one of those things of my dad’s that I got from him when I was in college. It’s a Keuffel and Esser Drafting set, in the Mercury series. I tucked the black leather case up above me years ago and occasionally look at it just for fun.

When I was taking Howard Rosenberg’s Art 101(or was it 102?) class at UNR, he asked us to create a piece three times; first in pencil, second in ink, and third in three dimensions. In retrospect and after years of therapy, I can say I loved the assignment, but I made it tricky on myself by choosing a pattern that involved tons of half circles spaced a quarter of inch apart. I didn’t realize it at the time, but it was very quilt-like and a precursor, perhaps to some of the current quilt art I enjoy now. 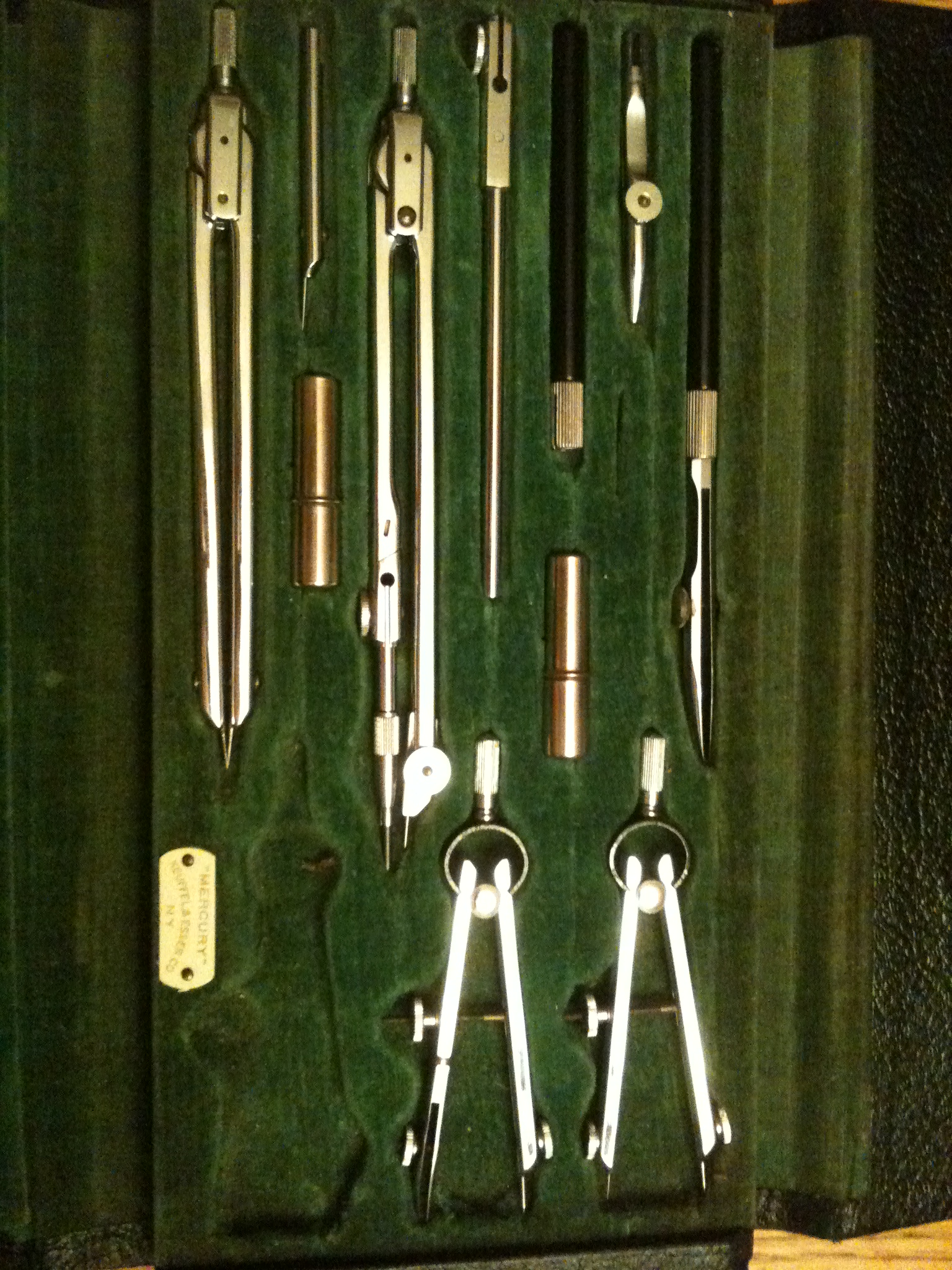 The second part of the assignment was a challenge. Drawing a smooth semi-circle with ink is nearly impossible without the aid of a good compass. But, I was at a loss for how to do it in ink. My dad came to the rescue by pulling out his old drafting set that he had used while studying architecture. There are several little pointy ended compasses as well as some that are made to hold ink the old-fashioned way–suspended between two pieces of metal. Did I mention that part of the assignment was to use this old-fashioned sort of inking method?

By the end of the weekend, I was in tears. I had made twelve or so drafts, each of which had at least one blot on it, and I gave up. I cut and pasted the two most successful pieces together. Did I mention that Howard, who apparently is still pissing off students at UNR with his irascible intensity, wanted perfection? Not a blob of ink was allowed. I took the whole collection of botched pieces into class and showed him my cut and paste job. He began to rail at me for daring to cut and paste things together. When I pulled out the whole set of attempts he visibly softened and said, “Well, at least you really tried” before moving onto the next student.

After that, I used the set occasionally, and never as intensely as I did that one weekend I slaved on half circles. It’s a quality set. The metal is probably stainless steel and in pristine condition. The heft of the pieces in the hand is so much more satisfying than the plastic piece I’d gotten via Amazon over the summer. While I’m not willing to hand it over entirely or let her take it to school, I am letting her use it at home.

It’s just…kind of cool to see it in use again. I have things from my mom that I use on a daily basis, like her Dessert Rose dishes. Whenever I use something that came from her, I do think, “Oh. This was Mom’s…she used it…I’m using it and enjoying it now..” and I like that connection.

But, I don’t have so much of my dad’s stuff that I use. Paintings hang on the wall, but they don’t get touched. Bill uses Dad’s kiln on a more regular basis, but I tend to stay away from the pottery stuff. As I watch my daughter look at all the shiny pieces, I imagine what it was like for my dad to get it all those years ago, my own enjoyment from using it, and I find the connection meaningful in a powerful way.