I make things up.  I lie.  It is not a malicious sort of thing on my part.  It is simply part of my nature.    In order to spin a good yarn, it’s important for me to make stuff up.  I admit to it freely.  Don’t believe anything I write, because what I’ve written is not necessarily true.  It is very freeing.  It is the desire to exercise my imagination that  made Journalism a very bad choice for me.  I was taught to check facts and to make sure everything put into a story is “real.”  Fact-checking is an integral part of the process.  But, wouldn’t it read better if I added details?  And, if I couldn’t remember the exact color of the floor, did it really matter?  Well, yes.  It does.  The rigors of journalism are admirable when adopted, and we expect them in news stories.

I don’t steal things, but I do steal ideas and stuff.  I know that’s a bit nebulous, and you can’t arrest me for it.  I would never steal written words from another author, that’s called plagiarism.   I freely take things from life so that I can use them in my stories.   Maybe you’ve seen the t-shirt that says, “Watch out, what you say might end up in my next novel.”   I hope I disguise things well enough that they merely ring bells with friends rather than knock them unconscious with personal recognition.  I’d never take my friends’  real life struggles, change the name and disguise them behind a new hair color or sex change, but I would take a small nugget of their experience that would ring true enough to bring a character to life.

I also spy on complete strangers.  Recently, I watched as a woman was escorted out of my son’s soccer center by three policemen.  She had to gather her three children with one policeman at her arm, and they all went to the parking lot together.  Being the person I am, I picked up my purse and followed them as far as the window so I could watch the scene unfold.  Without the real dialogue, I began to make up my own.  I watched one policeman spend time with her kids, away from her, and the woman with the two other officers, stories began to ripple through my brain to fill in the missing gaps in reality.  I was mostly relieved when she got in her car and left, but I will admit to a little disappointment that my car had been parked too far away to make it practical for me to get close enough to eavesdrop and really listen in.   It is incidents like this that form the catalyst for entire short stories or scenes in longer works.

One of my teachers, Kathleen Alcala, (her website is linked here) had us do an exercise where we were to write down the dialogue we over heard while eavesdropping.  I spent the entire week listening to other people’s conversations at restaurants, in the grocery store and just about any place I could.  That week didn’t prove very fruitful for me, but someone in the class got a juicy bit that could easily have morphed into an entire novel if not a made for television movie. 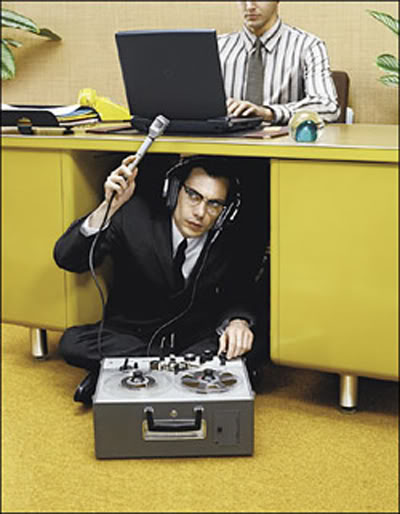 I finally had a lucky break at Costco one day while waiting in the return line.  Someone ahead of me was an obvious regular and was greeted by the customer service rep.  She stopped him to ask where his little boy was.  He paused and said, “Well, it turns out he’s not really my son.  We had the paternity testing done, and…well he’s not mine.”  The girl looked taken aback and said, “Oh.”  There’s not much you can really say in polite company when faced with such news is there?  Then, he went on to explain how he still loved the boy, but that he wasn’t allowed custody.  He was still allowed to visit because it was good for the boy etc.  It was an interesting little interlude, and I found myself trying to take notes without anyone noticing.

My favorite place to spy is in lines.   It always amazes me how much people talk on cell phones in lines at the post office or grocery store as if they were in a private phone booth.  I used to make fun of people and answer their questions directly to them as if they were talking to me.  Instead of interrupting people in their conversation,  I just listen.  Hoo-boy.   If the person on the other end of the cell phone can hear you, there’s a good chance I can too.  The only difference is I’m taking notes.  I’m the one who looks like I’m texting on my iPhone, but I’m really copying your words down for story ideas and direct dialogue.  Thanks for the help!