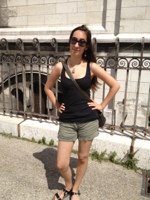 It’s sort of strange that a family comprised of all atheists finds its way to places like Notre Dame and the Sacre Coeur Basilica. We made it to Notre Dame the first day we were in Paris. The line to get in extended out across the plaza in front of the cathedral but moved quickly. The signs at the door all said to be quiet, but there was a steady buzz of whispering throughout. The only reason we went was to see the famed Rosetta stained glass. Eli recently read “The King in the Window”–no doubt inspired by Adam Gopnik’s year living in Paris–and there was some glass jumping going on in that. The cathedral is about to celebrate its 850th anniversary and they are renovating and collecting money throughout the cathedral. The experience was anything but peaceful or awe inspiring with the large crowds. I almost feel sorry for anyone who lives in the vicinity and calls the cathedral their home church. It would be impossible to find any sort of contemplative solitude. Maybe they have special hours for local congregants.

On Monday, we headed up to Montmartre and the Sacre Coeur Basillica. The view heading uphill, with the glowing white dome against the clear blue sky, was a classic Paris moment. The climb up the steps was easy enough and the line into the basilica was much shorter than that of Notre Dame. We made it to the front only to be told my daughter was “indecent.” I took a picture of her in her shorts and tank top, you can see it at the upper left of this post. We were told to cover her up as women in shorter skirts than her shorts and sun dresses filed on in. Emma was not quite foaming at the mouth at the injustice of it. Fortunately, she always has a scarf and sweater in her bag so she wrapped the scarf around to make a makeshift skirt and put on her sweater. Her “skirt” barely covered her shorts and her shoulders were now hidden from view. The door monitor was rather subjective in the way she turned people away or let them in. The younger they were, the more likely, it seemed to me, that they were told to cover up. Emma in her “decent” attire is shown below. (if the WP app cooperates) 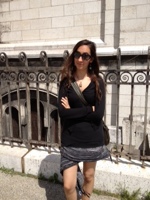 The actual Basillica is quite different than Notre Dame. The harsher entry requirements and the guy just inside saying “shhhhh” while holding up a finger to his lips as you enter make it crystal clear they want you to be quiet inside. There was a service going on when we visited, so we got to witness real live Parisian Catholics getting up and down on their knees while singing. There was a nice bit of soprano solo by a nun for a while, and we got to experience the acoustics of a single voice in the huge space. They are getting ready to renovate their pipe organ, and I can just imagine how awesome it will sound in there. I have always appreciated liturgical music–especially when they are in Latin and I don’t understand the words.

One of the busiest little chapels had many supplicants, including one who climbed through the barricade to kneel at the base of a statuette, prayer beads in hand. I made a note of the name to look up when we had Internet access again. I couldn’t help but wonder who this “St. Vierge” might be. I can already hear some of my multi-lingual and Catholic friends laughing. Go ahead and laugh, because I know I did a palm to forehead slap once I’d looked up the translation. This was only made a little more hilarious when Bill pointed out the one of the French astrological signs we saw on a table was also Vierge. Go, cognates!