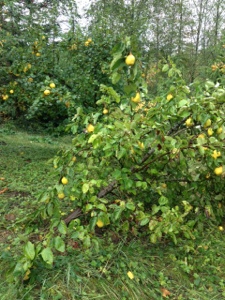 I blogged about quinces last year, but this noble and much ignored fruit deserves a yearly mention. There simply is nothing else that smells like quince. It has been described as a mixture of apple and pear with overtones of honey, and that is probably as close as you can get without actually experiencing quince yourself–but it is much better than that. I typically cook up the fruit and make a clear fruit juice for jelly. Used to be that was all I made with quince–Jelly. The yellow fruit is pretty enough, but it doesn’t look like much to begin with. And, while it is cooking, the house smells divine. I sometimes go outside just so I can come back in to the fresh smell of it. Once cooked, the liquid turns a rich rosé color,and the jelly looks jewel-like in jars.

The foreground tree was so heavily laden that it bent over to one side. As I picked the fruit, the branches lifted up off the ground a couple of feet, but the main trunk of the tree is still quiet askew. We will need to stake it and do some clever pruning to get it back into its upright position. The tree in the back is at the top of a little hill in our orchard. It took about an hour of going up and down a ladder to get most of the fruit off. I ran into trouble with the hawthorn tree next to it and gave up on a couple of pieces. After all–I already had nearly 100 pounds picked, and I don’t do so well on ladders. 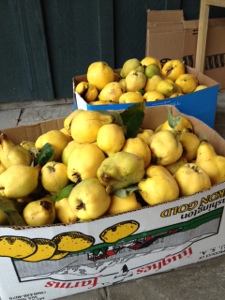 So now I have these two boxes of quince to process. If you look closely, you can see the one box has fruit that is more pear shaped, while the other box is a bit more rounded. Last year, I kept the two varieties completely separated in the cooking process. This year, I am going to do some mixtures to see if the combination of the two creates a more complex flavor profile. In addition to regular old plain jelly, I plan on repeating the experiment of quince-lime marmalade from last year, and adding in membrillo to my repertoire for the first time. I have plenty to experiment with!