Letting Go of the Stash 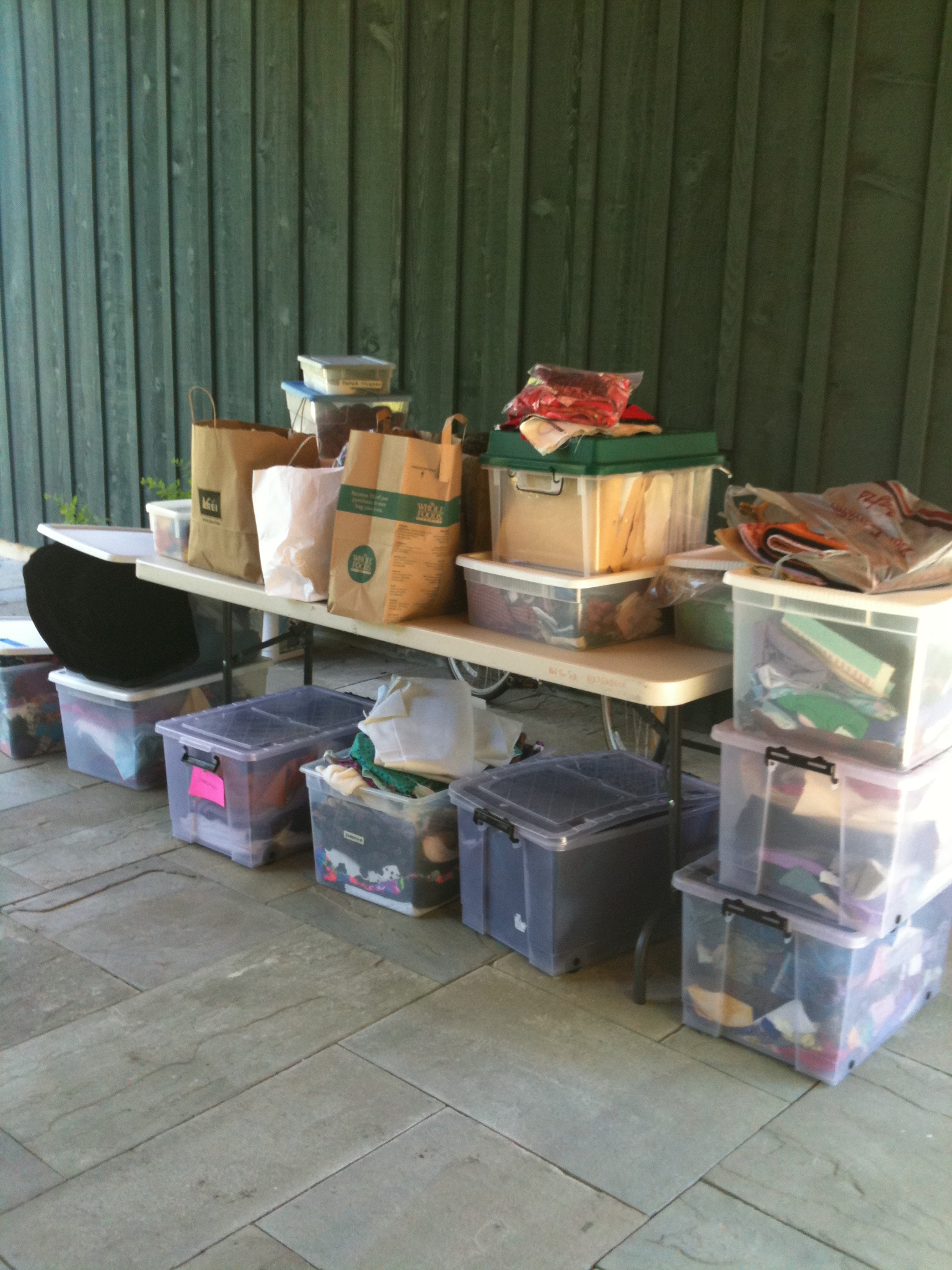 The stash...or most of it, anyway.

A few years ago I was lucky enough to have Hulda Emilsdottir come over and help me organize my house. She’s probably the queen of the world when it comes to organizing things and getting rid of stuff. At the time, she said something that I sort of brushed aside or just pointedly chose to ignore. I can’t remember the exact words she used but it was something about just having this extra stuff around is taking up space and energy in my mind. She was talking about the boxes and boxes of fabrics and projects that I have…erm…had (more about the change in tense soon) filling my storage closet. Even with them neatly labeled in boxes, just having this stuff sitting there unused and unfinished was taking up some amount of my energy thinking about “one day I’m going to do this or that.” She was right, of course, but at the time, I didn’t want to give up on some of the ideas I had that lived in the physical stash. 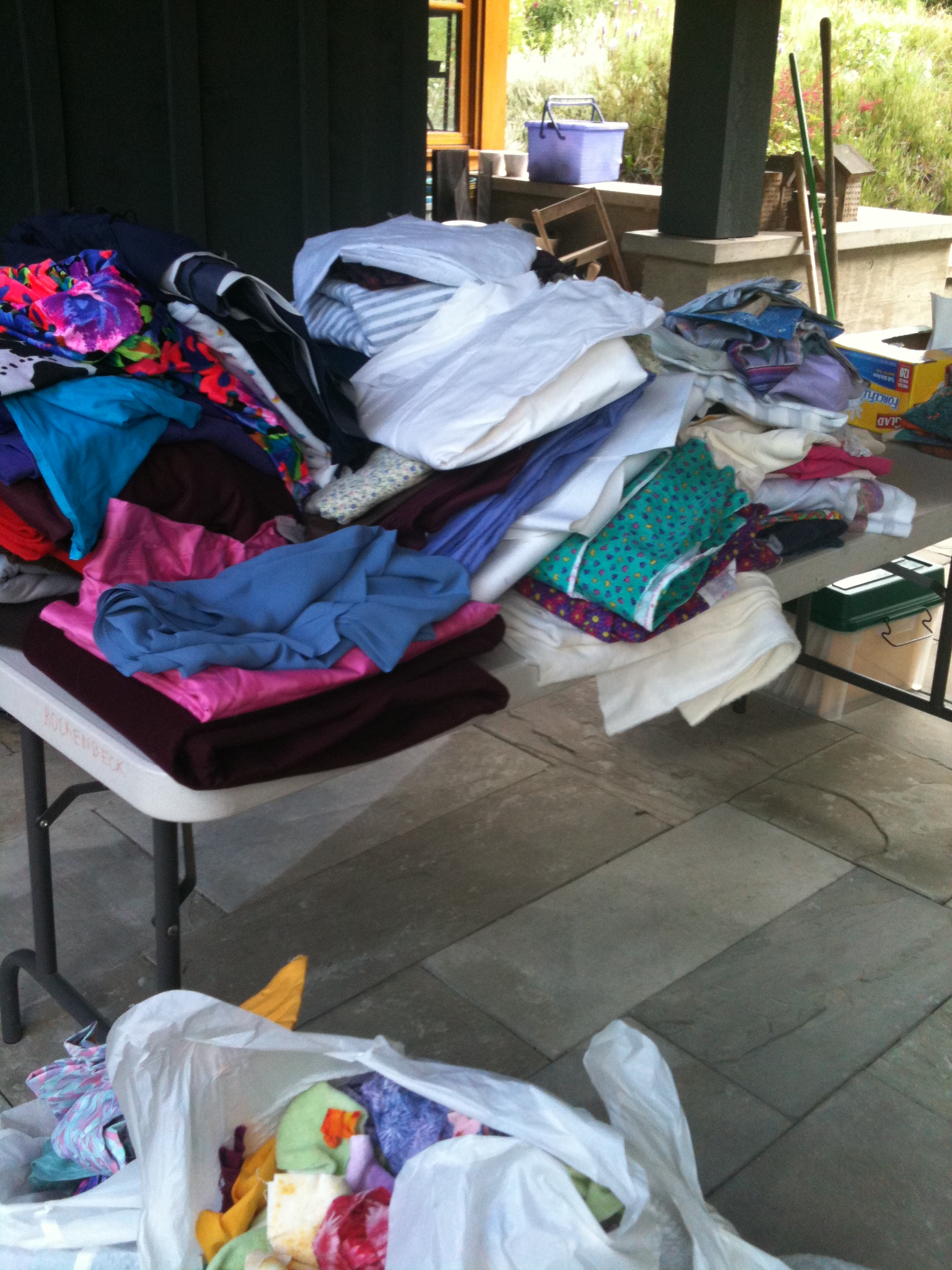 OUt of the boxes and sorted into scraps vs. yardage.

Recently, my daughter asked me to help her make a skirt, and I looked around the virtually unused sewing room and went into a state of near panic. I haven’t done much sewing of late, and every horizontal surface was covered with stuff. It had become the room that I ended up tossing stuff in before parties–piles of stuff that should have rightly been sorted and tossed or dealt with but seemed too much to do in the face of forty people showing up. But, even more, there was more stash to deal with. Not fabric so much, but yarn. I had exchanged my passion for fabric into that of yarn. Add to that an impulsive few days on E-Bay, and I just had TOO MUCH STUFF. I went through the closet that Hulda had helped organize and pulled out everything that I needed to just…let go.

I found fabric that I had purchased while working at House of Fabrics, my first job that started in 1984 and only lasted until about 1987 at most. I also found fabric from my stint at the Lake Washington Vocational College’s Professional Tailoring program that I took after being laid off from Quadtek in 1992. The concept of sewing professionally only lasted a short while. The economics of it plus the fact that the fussy work involved was okay when I was poking along for making my own clothes, but working for clients one-on-one was just not my cup of tea.

I also found scraps. Lots and lots of scraps from the many dresses, quilts and costumes I’ve made over the years. I’ve got a pretty tactile based memory, and just touching various pieces of fabric brought projects long gone back to mind. Pillows for my mom’s living room, a fairy costume for my daughter, a dress I loved until it was shreds, a silky bit that was left from my first attempt at a negligee, brightly colored knits from a shirt Bill wore until it was faded into pastels, quilts I made for my kids and other family members…the list goes on.

I sorted through the boxes, pulled out a few pieces of choice fabric that still excite my artistic tendencies and put the rest out for friends to comb through. After a few days of Facebook advertising, and many loads of stuff taken away, I moved to Freecycle. I had several people interested, but found that the request from a mom in charge of a 4-H group with fifteen very interested girls hit my heart just right. I was treated to squeals of delight as we loaded up the back of the ‘taker’s’ minivan. Fabric that I had hoarded with hopeful intent and given up on is now being fondled and dreamed about anew.