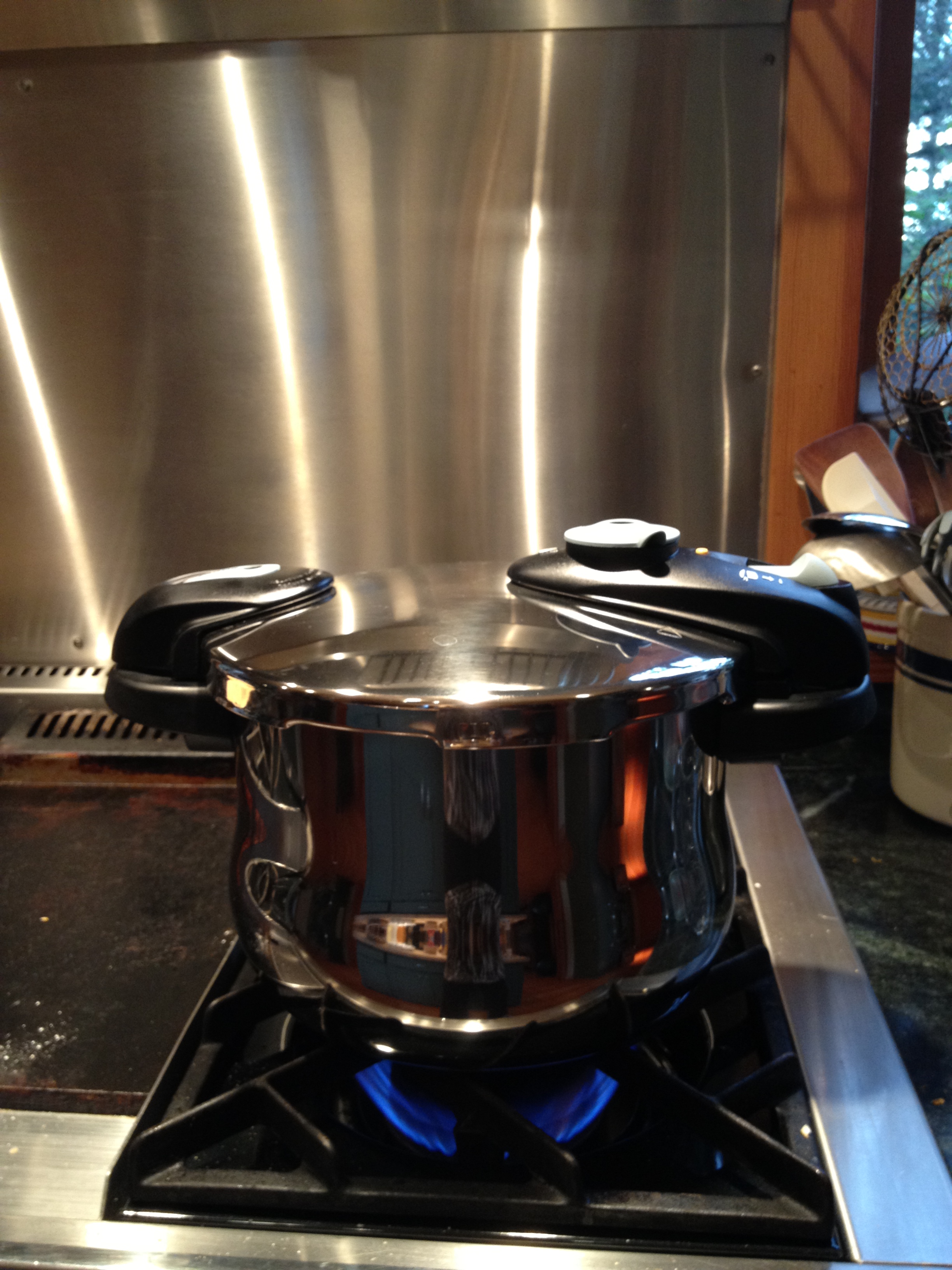 I celebrated a birthday recently, and my hubby got me this shiny Fagor Pressure cooker. (Okay, so it’s a different kind of “shiny” than some ladies like to get, but I did ask for this!) We’ve all heard stories about exploding pressure cookers and canners, and I don’t know many people who own them or use them on a regular basis. After doing some research, I picked out this Fagor Futuro 6 Quart Pressure Cooker

and put it on my wish list. I also asked for a traditional, omnivore-based, cook book to get a feel for how to use the thing. It only took me about half an hour of reading to realize that it is not exactly rocket science to use, and I was ordering a couple of specific Vegan oriented cookbooks for more help.

My mom didn’t use one because she was afraid of them–and, with good reason. Miss Vickie’s Big Book of Pressure Cooker Recipes

starts with an in-depth history of pressure cookers and exactly why there are a couple of generations of Americans who have missed out on this fabulous cooking tool. Basically, pre-WWII pressure cookers were reliable and used in almost every American kitchen. During the war, they became highly prized items and not easily available as most metal was being turned into airplanes and weapons rather than cookers. After the war, a huge glut of cookers hit the market as weapons manufacturers sought to create something more appropriate for the post-war American market. It is these post-war cookers that were manufactured in haste and without due diligence that created exploding and unreliable cookware. Bad designs and poor manufacturing together made a couple of generations wary of the whole process and pretty much killed the market for them in in the states.

In Europe, however, there was no such glut on the market, and the pressure cooker has been in consistent use. And for good reason. They save time and energy. The moral of the story is to not trust a pressure cooker you don’t buy yourself unless you absolutely know the source of manufacture and quality. Making sure you follow the basic safety rules clearly laid out in every cookbook and that comes with the cooker should ensure safe cooking. 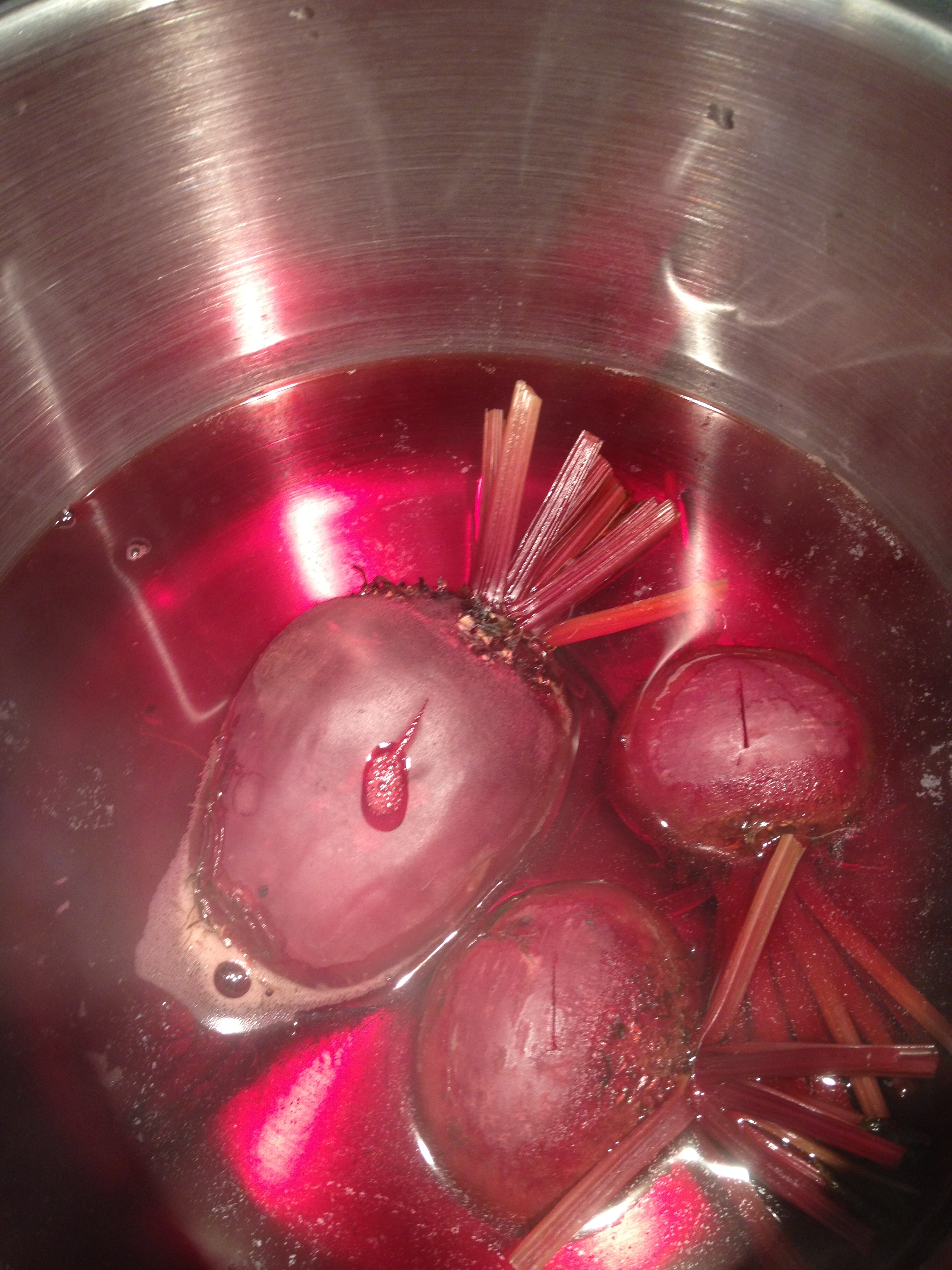 My first project was to find something super easy to try out. I picked beets. What is better than cooked beets? Cooked beets in 15 minutes! Okay, maybe you don’t like cooked beets, but for people who cook them regularly, you know it takes a good 45 minutes to an hour with regular stove top methods. In case you missed my guest blog post at Full Circle Farms,click here for a delicious beet salad recipe.

So, maybe beets don’t float your boat. I get that, and if you read the blog post I linked you to above, you’ll see I didn’t always like them either. But, I had this new toy, and I wasn’t about to just stop with a few beets and call it a day. Along with the salad, I decided to try my hand at a recipe on the DVD demo that came with the cooker–a risotto. I thought I followed the directions to the letter, but it turns out there are some things to learn when it comes to using a pressure cooker. 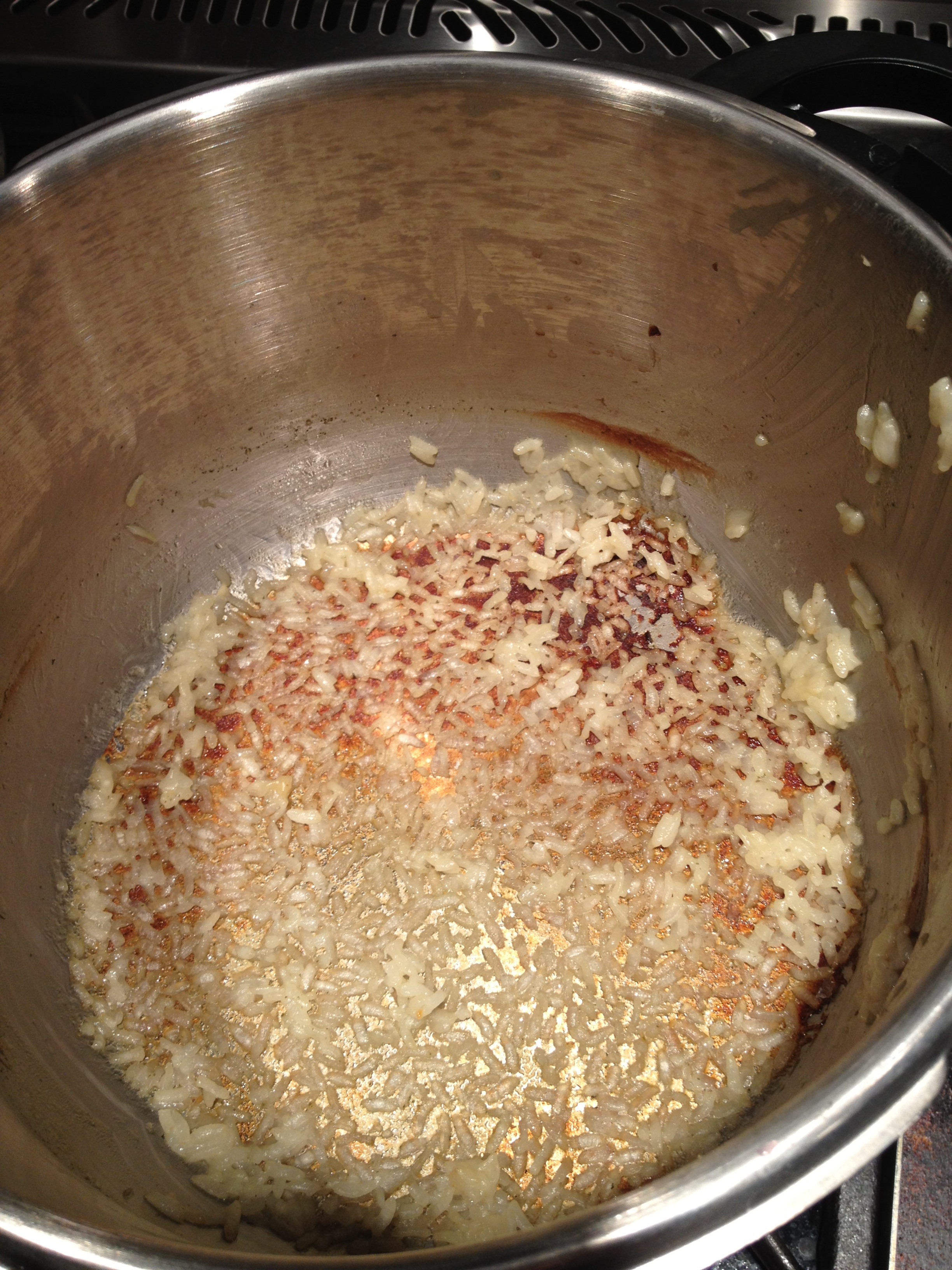 As you can see with this photo to the left, there was some sticking going on with the risotto. I wasn’t about to admit defeat so much as try to figure out why it didn’t come out just like it had in the video. The risotto off the top of the messed up parts tasted fine, though, so we still had dinner in…uhm…eight minutes? Or something close to it anyway. It turns out that I needed to reduce the heat even lower on the cooker once it had reached pressure. I let it stay up too high and sticking ensued.

So, here’s the thing that I find magical about pressure cooking. It takes so little time to cook things that it is almost hard to believe. Each time I close the lid and turn on the timer, I have this sense that there is no way all the food I just closed in there can really be ready to eat. And, yet, over the course of the last couple of weeks, I have made steel cut oats in five minutes, Thai sticky rice in seven, Christmas Lima beans in eight, and Adzuki beans in eight. I haven’t used it every meal, so that’s all I have right now, but I see a whole lot of experimenting coming my way.

(For my Vegan friends, I highly recommend The New Fast Food: The Veggie Queen Pressure Cooks Whole Food Meals in Less than 30 MInutes

and Great Vegetarian Cooking Under Pressure

. Both books have quick charts on pressure cooking a huge variety of grains and beans as well as veggies. They both have plenty of recipes to try out and lots of advice on transferring tried and true recipes to the pressure cooker.)