Quince Liqueur–with the help of some friends 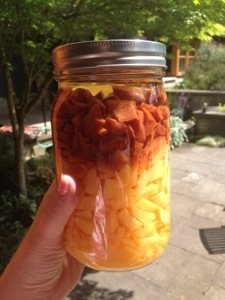 Those of you who know me well may be wondering about this latest project, because if you know me well, you know I don’t drink booze. You probably also know that if quince is involved, there is no question about my participation in such a project. I have blogged quite a bit about this marvelous fruit. Last fall, we had a huge crop of quince, and I was running out of ideas. Even an ardent lover of quince can only eat so much quince jelly, jam and chutney. We can only give away so much of it to friends and family. As I googled quince and what other people did with it, I came across a home made quince liqueur recipe somewhere. After following the directions of cleaning a jar, cutting up fruit and covering it with vodka, I put the jar in the pantry. I remembered to shake it every once in a while, but it got shuffled around enough that I kinda forgot all about it.

That is, I forgot about it until Bill came out of the pantry holding up the jar, suggesting I should throw whatever was inside away. The top layer looked sort of gross, but all the fruit was well covered with vodka. I did an immediate plea for suggestions on Facebook and people responded right away. Booze is a preservative and, with the correct seal, the vodka should be fine.

I proceeded to filter the fruit through a coffee filter to drain the vodka, and out came this golden liquid. 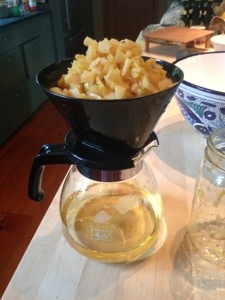 It smelled divine–like quince vodka. I had it in my head to make the liqueur but couldn’t remember where the heck I had found the original idea. It turns out that there are recipes all over the place, so I followed the suggestion of a friend to add simple syrup a half cup at a time until it seemed right. Since I had quince syrup in the pantry, I decided to up the quinceness of the drink by adding quince syrup instead of plain simple syrup. I added half a cup, but it didn’t seem like it was sweet enough (I didn’t really think a teaspoon was going to send me into a frenzy of uncontrolled drinking…it didn’t) so I added another half cup to use the jar of syrup I had opened and felt like it was sweet enough, and boozy. Now, I have to admit, I did this all by smell and a tiny tiny taste. Not knowing how sweet liqueur is “supposed” to be, I left it as is. I figured my taste testers could let me know if I need to add more next time. 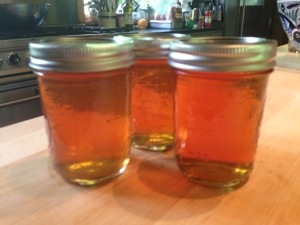 The finished product has the same amber jewel tones of my quince jelly, except it is liquid. My plan is to figure out a dessert that features the quince liqueur. Maybe a different take on tiramisu–soaking the lady fingers in the liqueur instead of espresso and layering it with a lime mousse. We discovered that quince and lime make a terrific combination a few years ago, and….oh…yeah…I just remembered. I have leftover lime quince marmalade, too. I see something coming together. A trifle with a twist? Candied lime peel as a garnish? Hmmmmmmm….