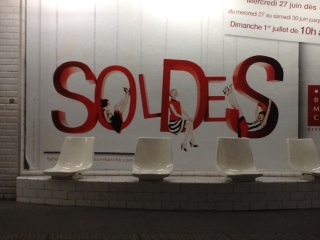 As soon as we got off the plane, we hit the tourisme office to purchase Metro passes. The lady who helped us seemed very excited that we had arrived in time for “The Sales.” This was pronounced with a capital sounding name, and, when we asked what she meant, she seemed amused we didn’t know. It just so happens that the French only have two sales during their calendar year. This year it is June 27-July 31. These sales periods are set by the government and announced with pomp and ceremony. This isn’t anything like your average 10% off teaser you see any given day in the US. This is serious business.

There are entire pages on the Internet devoted to the various strategies French people use to get the greatest deals. From what I can gather, early on means greater choice but lower discounts. Later in the sales period gets you better savings but only on what is left. We pause often to look inside some of the fashionable boutiques as we do the meandering tourist thing. This is the fashion capital of the world, after all. With signs saying 70% off it is hard to not be tempted even when the visible tags say 600EU. With prices like that, I can see why people look forward to the sale.

I think most American store owners would freak at the notion of the government setting sale dates. Actually, I can’t even imagine that happening in the US. I bet most Americans wouldn’t care for it, either.

One of my favorite shops we passed yesterday was a tea-pot shop. No surprise there. Even so, I didn’t buy any teapots yesterday. I decided a picture would have to do. 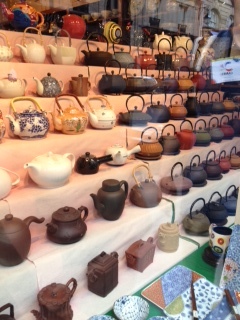