The 2012 Agriculture Census and You 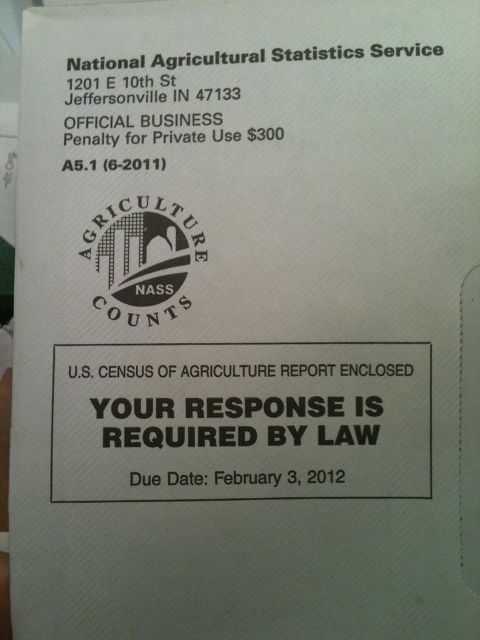 We, or more accurately, my husband, received this in the mail a couple of days ago. As a general rule, I go through my mail when I get it with a casual glance to ensure I’m not missing anything important and toss it on the desk near the door to deal with “at some point in the future” if it’s not. (I could derail this whole post with my bad mail habits, so I’ll just skip those details for now.) When I do see something unusual or possibly important, like things with big warnings about breaking the law, I open it right away.

I read the letter that came with it in bemusement. The USDA-NASS has somehow pegged Bill as the “operator” of a farm. I pegged it to some sort of survey that showed we own five acres with a bunch of fruit trees. He took the survey online and was done with it, but I posted the picture here on my Facebook page. Other friends who live in varying states of suburbia mentioned they’d received the same Census form as well.

A quick google search for “agricultural census” takes us to the United States Department of Agriculture National Agriculture Statistic Service website–USDA-NASS for short. No need to click the link because here’s what they have to say about who the USDA likes to include in their census.

The Census of Agriculture, taken every five years, is a complete count of U.S. farms and ranches and the people who operate them. Any person with estimated or expected annual sales of agricultural products of at least $1,000 is considered a producer and should be counted. The 2012 census will be conducted late in 2012 and into 2013 to reflect 2012 farming activities. It is the voice of agriculture: Make your voice heard. Sign up to be counted by clicking on I Want to… Make sure I’m Counted on the right hand side.

Okay…that’s all well and good, but it doesn’t say why the heck the government suddenly thinks we have any sort of agricultural product for sale. We grow veggies and eat them. I make a lot of jelly, but I give it away as gifts and make no profit. Clicking on the “About the census” link gives only outdated information from how the 2007 census will be carried out. The Frequently Asked Questions doesn’t help very much. Clearly, the site is still stuck in 2007 even though the same site has plenty of links to the results of the 2007 census.

What I did find outside of the government site isn’t really very much. A proposal made in 2009 by Kenneth A. Meter, called one of the most experienced food system analysts in the United States, makes my head spin a bit. Meter talks about food planning at the watershed level–a concept that resonates well with my organic and quasi-local oriented table. (I love chocolate and coffee…there are some things that will never be grown within 100 miles of where I live that I just won’t give up.) I find thinking about food distribution at this level exciting and sort of mind numbing at the same time, but perhaps this census has more to do with long-term planning and sustainability. The progressive in me would like to think that the USDA is finally acting, for once, responsibly and planning ahead for localized food production and decreased mega-agribusiness. You know, for when we have to get back to eating food that is grown locally when we can no longer transport perishables long distances on a regular and reliable basis.

Or, perhaps we can assume the worst. There is this blog that makes rather conspiracy-theory-like arguments and advocates tossing the survey into the trash with the junk mail.

I’ve clearly bungled into what could be a very controversial topic. At any rate, we answered the survey with a big bunch of “no” because, quite frankly, we don’t produce enough food to service our little family let alone to sell to anyone else.