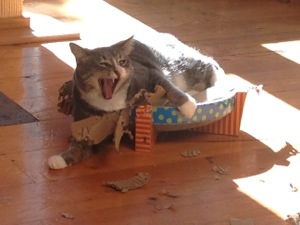 In October of 1987, I went to a circus in Moscow and watched well trained cats jump through hoops, perch on poles, and walk across tightropes. When we had our first kitten, Figaro, we managed to train him to fetch. Okay, so he only fetched green things–beans and scallions being his favorite– but, it was a predictable trick. We tried to teach him to keep his claws out of our sofa by squirting him with a spray of water only to learn that he liked it. He would go up to the sofa, dig his claws in deep and turn his face to accept the spray. We gave up and bought a leather sofa. Score one for us.

A few years later, a new house, and new furniture, we were back to having a cat attack the furniture. We ended up using “sticky paws”–a double sided tape–to some effect. But, it turns out as he aged, Figaro didn’t spent as much time scratching as he did as a younger cat and he didn’t cause as much damage to the new furniture. After he died, we got our two new kittens– fully grown cats now–and I did my best to not really see what they were doing to our furniture. Our chenille sofa is much worse the wear, and I am ready to get rid of it. The kids don’t see it the same way, but that is probably another blog post all together. I am really hating the shreds of fabric and bits of white stuffing that are popping out all over. 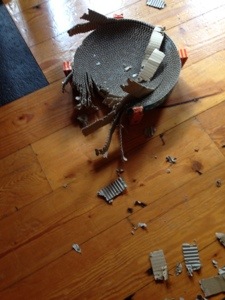 The new sofa comes next week, and I decided to do some pre-emptive cat training by getting some new, more interesting scratching options for them. The first picture shows Inkidu for scale. He is just yawning after having spent some time ripping at it and then sleeping. It’s a round kitty lounger/ scratcher designed to give the cat a place to lounge or scratch. I opened it less than two hours ago. The cats took right to it–so much so that they did enough damage that it’s already trashed. I was hoping for a longer, more slow destruction.

I think it’s time to try them with the squirt bottle. 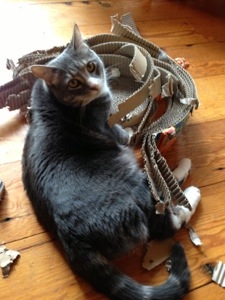