Uhm…Is this really a road? 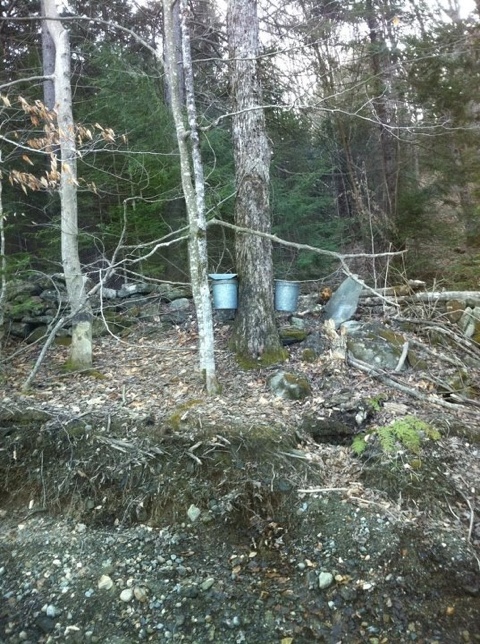 I’m sitting alone in the dining room of a quaint Vermont B&B at a table with a coffee next to my ipad. Emma is asleep upstairs in our yellow and flower wallpapered room. Actually, I hope she’s up and getting dressed because the smells emenating from the kitchen are fantastic, and I can’t wait to sample the local supply of maple syrup and the bacon cured at the butcher down the street. (So not a vegan trip this time around.) If nothing else, Bennington, Vermont is beautiful. The town is nestled in a valley surrounded by little hills. (They call them mountains around here, but that’s an East Coast view of the world. Mountains? Come to Seattle and I’ll show you some mountains.) Nevertheless, the view of the valley as we went into town for dinner last night was stunning. The hillside, covered in still leafless maple trees just glowed pink. Emma said it looked like a Waldorf Veil painting. That could be a sign that this place might be the right spot for her, or a warning. We have yet to visit the campus here in Bennington, so we don’t know the answer to that yet. The morning is bright and clear, and the sense of serenity and peace after a few days in Boston provides an interesting contrast.

We flew into Boston on Tuesday. After checking into our hotel, we went for a nice long walk around the Boston Commons and found the Unitarian Universalist Association headquarters at 25 Beacon Street. We just say “We’re going to 25” and know what that means. It is just down the street from the Commonwealth House, a gold-domed building set at the top of the Commons. In front of that was, appropriately enough, a youth-led demonstration against the current plan to raise the cost of the T fair to nearly double what it is today even for youth who can barely afford the current fare. It was low-key with a guy leading chants through a megaphone. Dinner at Legal Seafood was delicious, and we walked around the Emerson College area after eating. Emerson, like NYU is just part of the city and offers no ‘campus’ feel at all. 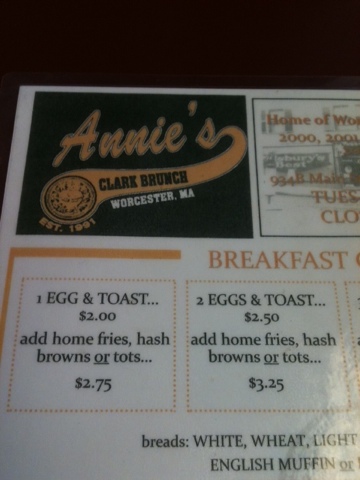 Our first visit was to Clark College in Worcester. The commuter rail took about 90 minutes and was relatively painless. Once in Worcester, it’s a 2 mile hike to Clark, so we took a taxi. We got there early in the day so we’d have plenty of time to explore the campus before her class and then the tour/info session. As we drove close to campus, we saw the “Annie’s Clark Brunch” restaurant and decided breakfast sounded like a good plan. (We’d had some pastry from Au Bon Pain on the train, but that was nearly two hours before.) The photo to the left should tell you a few things about Worcester. Look at the prices. Breakfast, which included way more food than we could eat, was only $11. When we walked in, I had one of those really strong smell memories–it was like walking into my grandmother’s cafe in Roberts, Montana. That smell of small cafe kitchen is hard to describe, but I think it comes from the smell of a hot griddle that is used to cook everything from meat, to potatoes, to veggies. I was duly warned that the spicy chili was spicy. The plates were huge, though, and neither of us could even finish.

The people at Clark, or Clarkies, were extremely friendly. The kids in the class Emma took were very welcoming and talked to her at length about their experience. The downside to Clark, frankly, is the location. Worcester is…erm…not pretty. The campus itself is okay and well-kept looking. The dining hall had lots of options, and the buildings were clean and safe feeling. But, it was really just sort of meh as far as location goes. It’s so far outside of Boston there’s little chance to just run into the big city for fun–it would need to be planned out, and there’s really nothing to do off campus near by. I mean…nothing. However, there are things that make up for it–a fine program and a very positive atmosphere.

The next day, we got a car in Boston and drove out to Brandeis. It’s in Waltham and closer to Boston,but we were planning to head up to Bennington straight up from Brandeis. The history of the school is interesting, and the emphasis on Social Justice is right up Emma’s alley, and it has an amazing theater department. Oh, add in thirteen….yes, thirteen…a cappella groups and you have one pretty smitten teenager. Did I mention there’s a quidditch team and a castle on campus? Uh-yeah…definitely the top pick reach school.

Getting to Bennington, VT from Boston was a challenge that had me sweating for a little while and placing quite a bit of faith in the Garmin GPS device I borrowed from my father-in-law. We were driving through on Route 9 and I saw the sign for “Marlboro College” and decided, on the spur of the moment to take a left turn to check it out. Marlboro is also on the “Forty Colleges that change lives” list so I figured it couldn’t hurt to at least just do a drive by. If nothing else, if we thought it looked interesting she could check it out online for details. As soon as I turned, the Garmin said “recalculating” to draw up a fresh route to Bennington. I ignored it until we were at Marlboro’s admission lot looking up at the college. It was…smaller than small. The student body is only 300, and there are no faculty around at night. It’s totally student led administration with a very interesting sort of philosophy. It didn’t take long for Emma to decide that is just too small.

I picked up the Garmin which had been quietly reproving me and recalculating the route the whole time. It said to go straight ahead, not turn around the way we had come. I only paused because what was straight ahead was unpaved road. It looked vaguely forest-service road like, so I put the car in park and took out the iphone. Since there was no service, I decided to just trust the technology in my hand and follow the directions the Garmin had selected from space. As we headed off, and down hill onto the dirt road, I couldn’t help but feel uneasy. Not only was it not paved, it was surrounded by woods. Not woods like we have, but mostly maple trees. (See the photo above.) It’s mapling season and there were literally thousands of trees being tapped as we drove by.

The Garmin said to continue on this road for 1.6 miles or so, and I did, sweating the entire time. Did it even know this was a dirt road? Was it really a road, or were we trespassing on some maple farmer’s private land? After an old Toyota Corolla sped past me, I relaxed a little. If a Corolla could do this drive, certainly my brand new rental Hyundai Sonata could manage it. We followed the Garmin’s advice and turned when it said onto yet another dirt road. And another. And another. Then, another. After about twenty miles of dirt-roads, I was beginning to wonder if we’d ever hit pavement again or if some crazy programer at Garmin was laughing maniacally. Finally, though, after what seemed like hours but was only an hour of me questioning my blind faith in technology, we were on route 9 and only a few minutes from Bennington. 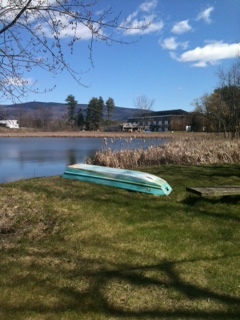 Today’s visit at Bennington was mixed. As a parent, I felt a strange relief at the obvious safety of the campus. There were no blue box emergency poles, and, unlike at Clark, they didn’t have to go into any detail about how you get an escort from the library to your dorm late at night. And, well, it’s beautiful. The campus is big and sprawling. The print shop in the art building had me drooling with envy. (I counted four presses in passing, and I think there might have been more around a corner.) There is a nice mixture of old and new buildings–the newest houses a UN-configuration for a conference room, and one of the oldest is a mansion turned music department with creaky wood floors and plenty of character. Emma’s classroom experience was not as positive as the one she had at Clark. The students weren’t as overtly friendly or enthusiastic as the ones she met at Clark, and there were distinct cannabis overtones wafting from a couple of the people in the class. She figured that their lack of participation in the class discussion might have something to do with just how stoned they were. (Not a positive for this kid.) The program at Bennington, however, looks to be a good one if reality matches the marketing. Her plan is to grill her freshman friend she is spending the night with to get a better sense of what really goes on once you are a student there. That is, in addition to going to the jazz lounge that starts at 10:00 pm. When did I get to be old enough to think that starting anything at 10:00 seems insanely late?

Any Clarkies, Brandeisians or Bennington grads in my extended network? Drop us a line about your experiences!