Why I’m Supporting A Kickstarter Project 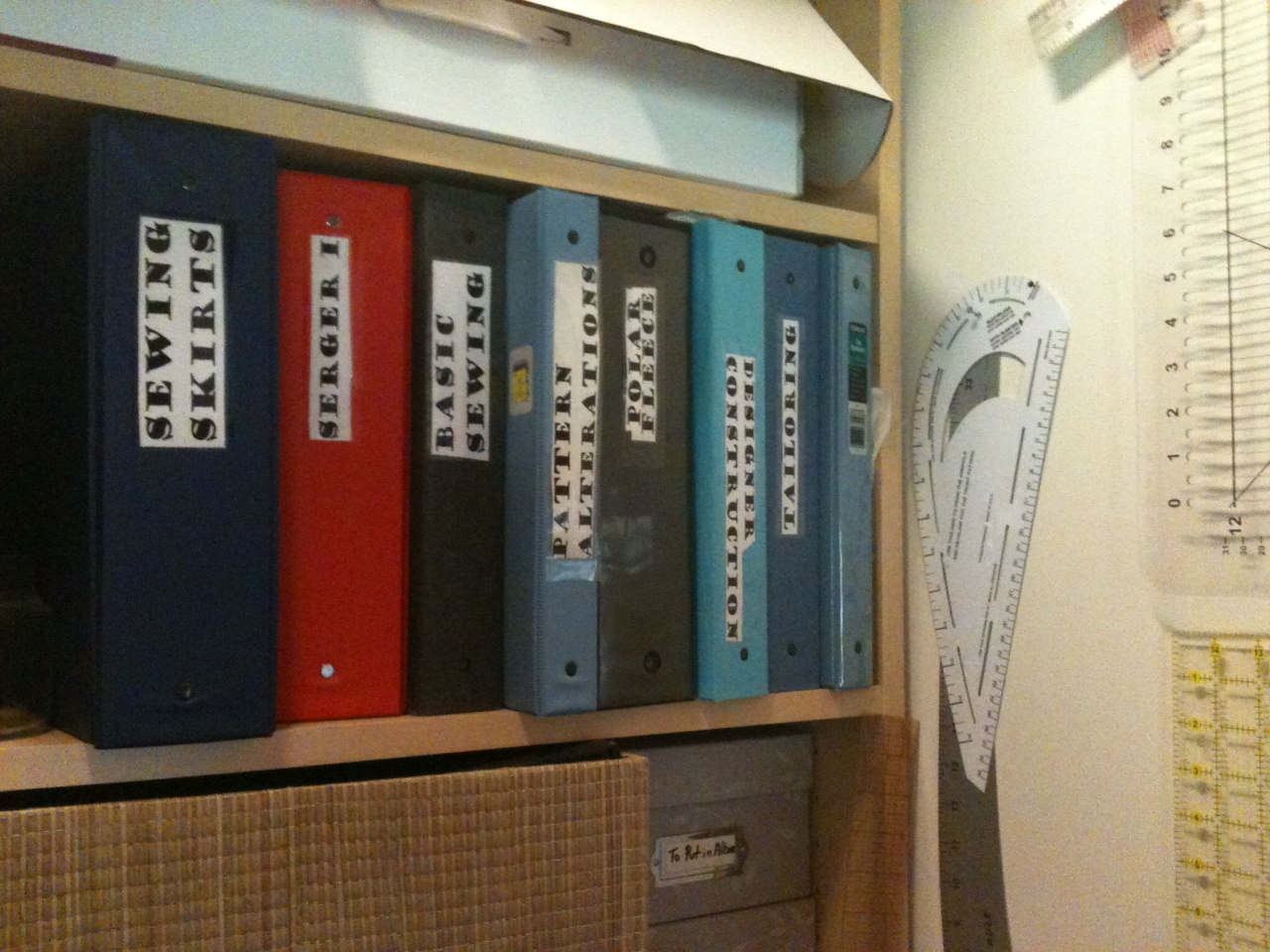 Some of my class binders filled with samples and notes.

I haven’t had much reason to mention this, but one little known fact about me is that I almost have a technical certificate training in clothing design and tailoring. I say almost because the vocational sewing program at Lake Washington Technical College just went *poof* when I was about two classes shy of earning the certificate. Since I wasn’t planning on becoming a professional seamstress, I simply moved my sewing attentions over to quilting. I originally started taking classes because I’d been laid off, and I wanted something to occupy my time while looking for new work and/or procreating. It was a toss-up which would happen first, new job or baby.

I’ll never forget the first lecture, when the teacher asked how many of us had grown up sewing. I raised my hand. My mom made most of my clothes, and my first job was in a fabric store. I sewed a lot, but had always struggled with the details with fitting and was in the class to learn more.

The teacher went on, “Remember the pattern directions that said, ‘apply facing’?” We all nodded. “Well,” she continued,”in the printed pattern all you get is the single direction. Apply facing. What you need to know is there are twelve different steps to applying the facing properly. If you don’t know those twelve steps, all you have is the little, almost meaningless picture in the pattern to go by.”

Therein lies the problem with patterns. The manufacturers simply don’t want to put the directions down in print every time they print a shirt pattern. It’s added expense. If you don’t know those twelve steps, you get a collar that is pretty messed up looking, fits badly, rolls wrong and has wads of extra fabric in the seam. The facing is just one part of the garment. Expand that out to every sewn line in a garment, and you can see why people have stopped sewing. Without knowing what’s missing from the pattern, you get crappy looking clothing that doesn’t fit.

There’s a lot of knowledge that has to be handed down or passed on or it will get lost. Having a mother hovering over you as you sew for hours is one way of doing it, but how many of us get that kind of apprenticeship?

So, what does this have to do with Kickstarter?

Well, when a friend of mine posted a link to this Kickstarter campaign on Facebook, I was instantly intrigued. I have made two corsets–one for me and one for my 17YO–without any real help from either patterns or internet. I can guarantee you there are at least a dozen steps missing from the patterns I used that I did not learn from MY mom. (I’m pretty sure the idea of making a corset never entered her head.) Not only that, finding the ‘proper’ tools for making corsets is a pain in the ass even with Google at my fingertips. The underbust corset I made for myself was simply for a costume and didn’t need to have much permanence or support. I made it in a few hours, and that’s all it needed to last. But it wasn’t a thing of beauty or integrity. The corset I made for my daughter was more carefully constructed, but the boning material began to poke through within a couple of wearings. If I had known more about the intricacies of corset making, both pieces of clothing would still be functional.

Alexis is planning on producing a video tutorial on making corsets. Her years of practical experience and knowledge will provide scores of people with an electronic apprenticeship of sort. The use of modern technology can fill the gap of the teacher over the shoulder. The level of workmanship, artistry and design in Alexis’ corsets only makes her plan of sharing the details that much more worthwhile. Kickstarter is a pledge program for which you may or may not receive some sort of reciprocation. In the case of “Making Corsets is A Cinch” people donating at various levels get various rewards–from thanks on Facebook, to the video series upon completion, to personalized artwork by the owner. I clicked the link, watched the video and went to Amazon to support the project. I hope you do, too.